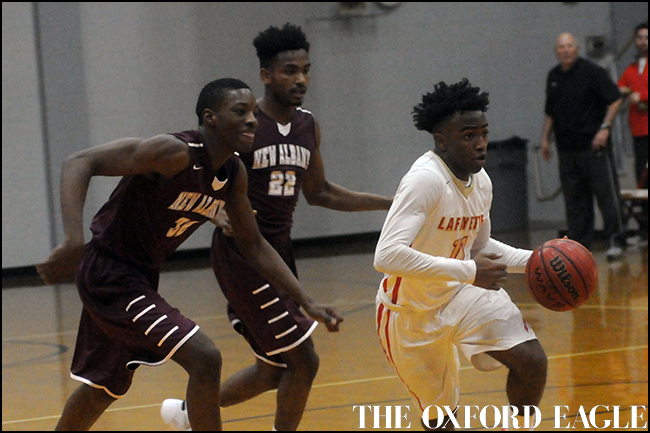 With the postseason around the corner, beginning with the Region 2-4A tournament at Byhalia next week, Lafayette’s girls basketball team had the opportunity to secure the No. 2 seed when it hosted New Albany Monday night.

The Commodores did just that, defeating the Bulldogs 48-23 inside the LHS gym during the first game of a doubleheader.

The games were played as a makeup date after they were postponed on Jan. 22 due to inclement weather.

It was a dominant effort by Lafayette (16-6, 4-1 Region 2-4A), which disrupted the Bulldogs from the start, though coach Shayne Linzy felt the Commodores could have played even better.

“Tonight, we didn’t have that passion. I didn’t see it,” Linzy said after the game. “We can’t do that. Not at this time (of the season). We have got to be hitting on all cylinders heading into the division tournament. Tonight, we did not do that.”

Defensively, Lafayette could not have performed any better to start the game. The Commodores allowed New Albany to score a basket in the first couple minutes of the game but then clamped down.

The Bulldogs would not score their second basket until the six-minute mark of the third quarter.

Using full court pressure and jumping into passing lanes to steal the ball, Lafayette cruised out to a 27-2 halftime lead.

“We are playing really well defensively,” Linzy said. “We have our moments offensively, but unfortunately I don’t know when they’re going to happen. We were able to make transition baskets and we do that normally. That’s a big part of our offense is transition. It was just kind of a lackadaisical, going through the motions that I was disappointed in.”

Linzy placed the blame on himself for the all-around performance of his team. He did mass substitutions throughout the game, trying to find a spark to get his team to play how he knew it could for 32 minutes.

New Albany had its best eight minutes of the night during the third quarter, scoring 13 of its points during the period. The Commodores clamped down again in the final quarter, holding New Albany to eight points to close out the game.

Boys’ struggles continue
Lafayette’s boys team was winless in region play heading into Monday night’s contest. It looked as if the Commodores might be able to finally knock the zero out of the Region 2-4A win column, but it was not to be as New Albany held on for a 59-45 victory in the nightcap of the doubleheader.

After getting in a hole after the first quarter, trailing 23-11, the Commodores (5-13, 0-5) used solid play in the second and third quarters to get to within three points of the Bulldogs.

With the score 38-35 late in the third period, Lafayette was unable to get any closer, missing a couple of 3-point shots as well as close-range attempts to either tie or take its first lead of the night.

New Albany used that opportunity to pull away in the fourth quarter for the win.

“I don’t know what happened,” Lafayette coach John Sherman said. “We had a good look at a 3 to tie and we didn’t hit the shot. I don’t really know what happened after that. I think we had some defensive breakdowns. … We’ve just struggled with the fourth quarter all year long whether we were in the ball game or not.”

Much like Lafayette’s girls did in the opening game, New Albany’s boys used full-court pressure to disrupt the Commodores, causing turnovers in the backcourt and intercepting passes for breakaway points.

Quin Jones led Lafayette with 14 points with Rashaun Rockette and Chris Long following up with seven points each. Jonah Matlock and Tyler Williams both added six points each.

“The thing about the press is we don’t meet the pass,” Sherman said. “We drill about stepping into the pass and meeting the pass. A lot of times, we don’t do it and it causes lots of turnovers. It’s not necessarily a bad pass, it’s just the receiver doesn’t step up to meet it.”

Lafayette’s busy week continues tonight as the Commodores travel to Kossuth before closing out the regular season on Friday against Montgomery County on Senior Night.

TAKING THE LEAD: Robinson prepares for junior campaign with…