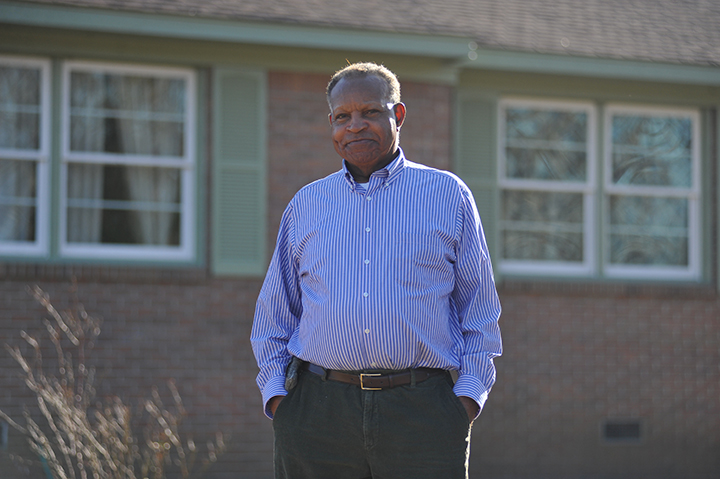 In Lafayette County, just outside of Oxford, there’s a community that surrounds two gas stations, a church, and a popular place for yard sales and trade.

Known by many as the Littlejohn’s area, because it surrounds Littlejohn’s Quick Shop off Highway 30, it has remained pretty much unchanged over the years since James A. Woods first began ministering in the area.

In the last two years, Woods has been a member of New Freedom Church of God in Christ located in the center of the community beside another gas station that competes with Littlejohn’s.

Woods, 73, and his wife, Mary Evelyn Woods, are community leaders there who are trying to make a difference in the area.

Woods’ life experiences eventually led him to become a pastor, and he has spent time in the Littlejohn’s community helping others and encouraging residents to attend the church.

Although he is not the lead pastor at New Freedom Church, he is still involved with the congregation and church mission.

Woods was born in Taylor. His family later moved to Union County, then back to Lafayette County, where he graduated from Oxford High School.

He played basketball at OHS, but didn’t spend a lot of time doing extra-curricular activities because he was the oldest child with three brothers and two sisters, and the family made a living picking cotton.

“We weren’t involved in a whole lot like the children are today,” he said. “Once you got through picking cotton and doing whatever, you got a chance to go to school.

“With my mother being a single parent most of the time, you didn’t have any help. You had to be around to lend her a helping hand. We were sort of on our own. She didn’t have a job. She was on welfare. Picking cotton was the only way we had of making a living.”

After high school, Woods worked at the University of Mississippi for a year and a half. Then he was drafted into the Army.

“When I went through my basic training in the service, out of the 500 people, I got a medal because I got the highest score,” he said. “Whatever I did, I tried to be good at it. Even when I was picking cotton, I could almost pick 500 pounds a day.”

Woods had been in service for about year and a half when he was sent from Fort Benning, Georgia, to Vietnam. In November 1965, his company walked into an ambush.

“The jungle was so thick you couldn’t see anyone,” he said. “The lieutenant got shot. I think 80 people got wounded that day. I got slightly wounded. I fell down and laid down like I was dead. I figured the enemy would stop shooting at me, and he did.

“It was a blessing from the Lord. They were aiming at me to shoot me half in to, but it hit the equipment I had on, a grenade launcher. I had it in my hand. It had a stock on it just like a shotgun. They shot a hole through it while I was holding it in my hand.”

Woods was sent home, and he arrived back in the states on Jan. 1, 1966. He had flashbacks for 35 years about the traumatic events he experienced until he shared them with a reporter.

“I had really never told it to nobody,” he said. “I really kept it to myself. When I told it to them, the flashbacks and dreaming I had that I was running from the enemy left me. Some things you have to tell somebody.”

Woods received a Bronze Star for his heroism, but it didn’t help him find a job.

A family member suggested that he attend a trade school, so Woods moved to Racine, Wisconsin, for five years, where he took classes in mechanics, woodworking, psychology and accounting, but he was drawn to upholstery.

“After I got my education, I was ready to come back, because I liked Mississippi better,” he said. “I had visited about 25 different states, and I like Mississippi best. I found out I could be good at upholstery and woodworking and refinishing. I could do that almost anywhere and put my roots down.”

As the owner of Dr. Woods Upholstery, Woods was in the business for 48 years before his retirement three years ago. He also served as the pastor of Faith Assembly Church of God in Christ in Lafayette County for 18 years.

“When I was a pastor, I used to go out in that area,” he said, referring to the Littlejohn’s community. “We had several tent revivals there across from Littlejohn’s store in the area where they park 18-wheelers.”

Woods said people in the community know him well.

“We are trying to get the people in that community to attend church, and really, people from all over Oxford,” he said. “We used to have street meetings all over Oxford. We’d have a tent set up different places all over town, trying to get people to come to Christ. I love being outside and talking.”

“They were there about eight years,” he said. “They moved to where they are now about three years ago and bought that place across from Littlejohn’s.

“We do outreach. We visit the nursing home. We feed people who are hungry, and they have clothes that they give away. We try to do things in the community. We help the homeless. We do as much as we possibly can. We are just a small membership.”

Woods said the church and the community are his main focus now.

“The Lord has blessed me to be a disabled veteran so that I can focus on the church and what I can do for the Lord at this point,” he said.