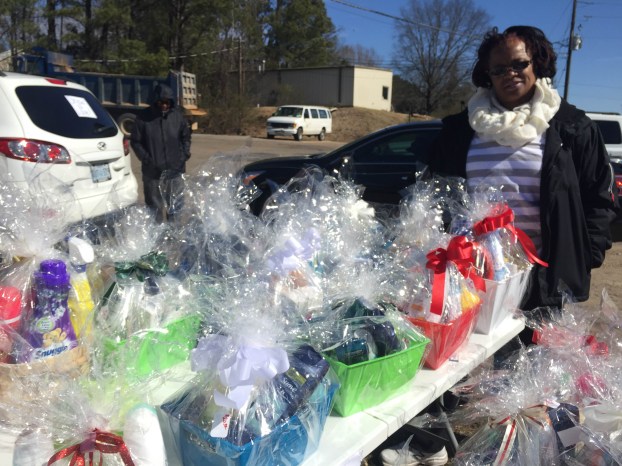 Veronical Johnson, 58, was found at the four-way stop as you enter Oxford from Highway 30 Saturday afternoon.

Johnson was leaning on her car behind a table of gift baskets that she and her friend, Nora Ingram, were selling.

Johnson, who is originally from Oxford, now lives in Southaven with her husband, who works as a building service manager for a law firm.

When she isn’t making and selling gift baskets as a side hobby, she works part time as an event specialist for Sam’s Club.

Johnson has three grown children — all who live in other states — five grandchildren and one great-grandchild. She was a single parent for many years while raising them.

“We’ve had our aches and pains along the way,” she said. “But they are doing well.”

Johnson said she worked at a couple of factories in Oxford that include the Kellwood sewing factory before it closed and Whirlpool.

“I hated to see it go, but that’s manufacturing — here today, gone tomorrow,” she said.

“We met at the Whirlpool plant,” she said. “We started with helping my sister do some baskets for a church program. We get together and make the baskets up. It’s a joint business for both of us.”

Johnson said she appreciates her friend.

“I’m proud to have a friend,” she said. “My friend, Nora, is the epitome of what a friend should be. She’s been there when I was sick. My life revolves around the kids, and she’s been there. She’s been along the journey.

“Friendship carries no debt. There’s nothing I wouldn’t do for her. If you got a friend, cherish that friend, because they don’t come by that easy. Anyone can say they’re a friend, but it’s in the way you show it.”

HELPING OUT: Supporting cast helps Rebels pull away for win over Hogs

Andy Kennedy has been pleading all season for Stefan Moody’s teammates to help out the Southeastern Conference’s leading scorer more... read more