Commodores rally for 2-4A tournament title 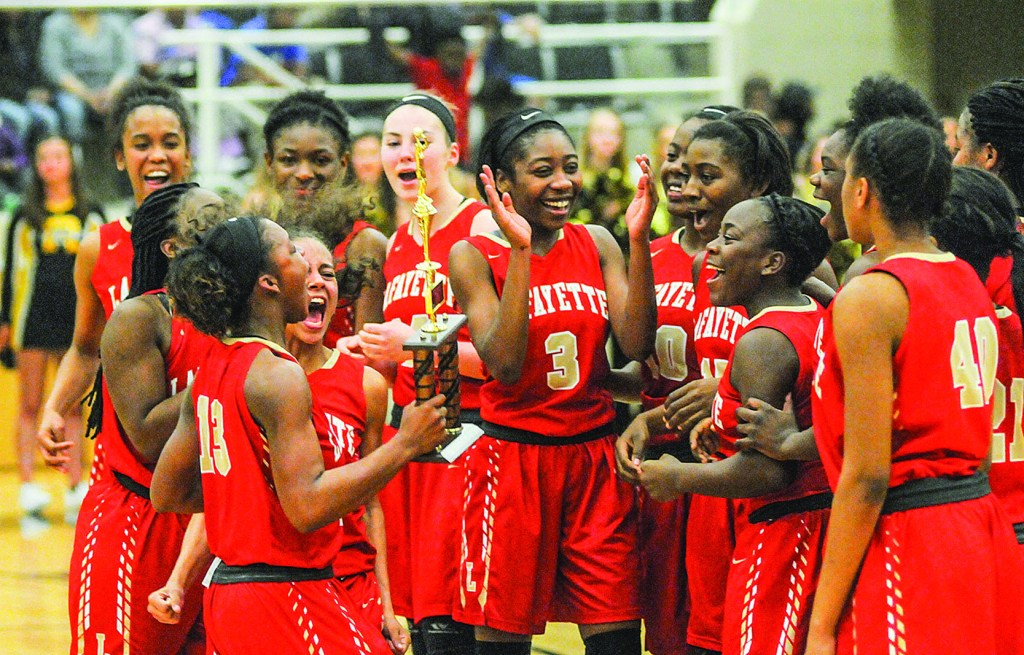 Members of Lafayette’s girls basketball team celebrate with the Region 2-4A tournament championship trophy after beating Byhalia 48-36 in the championship game Friday at the Ripley High Event Center. The Commodores earned a No. 1 seed in the MHSAA Class 4A playoffs with the win.

RIPLEY — Friday’s game between Lafayette and Byhalia looked as if it would come down to which team could slowly grind its way to a Region 2-4A girls tournament championship.

That all changed late.

The Commodores outscored Byhalia 20-6 in the fourth quarter to rally for the title with a 48-36 win at the Ripley High Event Center. Lafayette (20-6) earned a No. 1 seed in the MHSAA Class 4A playoffs with the win and will host Shannon, the No. 4 seed out of Region 1-4A, in the opening round Monday at 7 p.m.

Junior guard Shaniyah Buford was once again the catalyst for the Commodores, scoring 12 of her game-high 25 points in the fourth quarter after going for 36 points in Lafayette’s tournament-opening win over Ripley on Tuesday.

Lafayette trailed 30-28 after three quarters, but back-to-back buckets from Buford to start the fourth gave the Commodores their first lead of the game. Buford continued to attack the middle of the Indians’ zone defense with runners and floaters, scoring Lafayette’s first nine points of the quarter as the Commodores opened the quarter on an 11-0 run to take control.

“She’s able to hang in the air for it seems like forever. She’s got great touch,” Lafayette coach Shayne Linzy said. “This is stuff, if you come to our practice, after practice or before practice, she practices that stuff. Some kids are talking, and she’s out there practicing the floaters from all different spots on the court and going game speed when she does it, which is crazy. But that’s just how she is.

“We were shooting the ball outside a little too much, and that was something at halftime that we changed.”

The Commodores pushed the lead to double digits midway through the final quarter and led by as many as 15. Chelsea Allen added six points for Lafayette while Kavacia Johnson was Byhalia’s lone player in double figures with 15 points.

Offense was hard to come by for both teams early as Lafayette needed a half-court heave from Buford as time ran out on the first half to trim Byhalia’s advantage to 25-18 at the break. But the Commodores’ relentless man defense continued to take its toll on the Indians.

Lafayette limited Johnson to just three field goals in the second half and made a calculated move to take away easy scoring opportunities down low for Tijanna Powell by electing to keep two defenders on the Indians’ center. It worked as no other Byhalia player had more than nine points.

“We knew outside of (Johnson), their point guard, they wanted to get the ball to (Powell),” Linzy said. “So we were taking a chance on saying, ‘Hey, those other girls need to beat us shooting the ball. We’re not going to give easy layups.’ That’s kind of what we were wanting to do.”