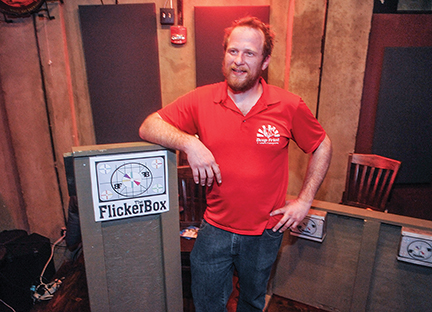 Bruce Newman Matt Wymer does a podcast called The Flicker Box from the Blind Pig on Wednesday.

Years ago, Matt Wymer, 36, was part of a sketch comedy show that aired on the University of Mississippi television station. You can still occasionally catch it at night if you’re up late or early, he said.

Today, the Oxford native and owner of Deep Fried T-Shirts at 2618 West Oxford Loop is bringing comedy to the Internet with a new Oxford-based podcast called The Flicker Box.

“We started right around the first of the year,” said Wymer, who recorded his fifth podcast this week. “Every week, we have three guests on, and we talk about a genre of movies. It’s a movie discussion with a little game thing at the end.”

The podcast is a work in progress and an extension of the “terrible comedy sketches” he once participated in, Wymer laughed.

“Originally, it was kind of like ‘The Kids in the Hall,’ (a Canadian sketch comedy group formed in 1984),” he said. “We’re revamping it (the sketches) as part of the podcast craze. Talking about movies was the easiest way to start.”

Wymer, who has two children, joked that they have “finally gotten big enough to where I don’t have to help them constantly.” That’s why he decided to create the podcast that has featured musicians and local celebrities.

“I’m trying to have a mixture on our panel — an actor, musician and a comedian — because everyone sees a movie in a different way,” he said.

Melanie Addington, executive director of the Oxford Film Festival, was a recent guest.

“We’ve been featuring a lot of local comedians,” he said. “I had a couple of bartenders from around town. We’re going to be recruiting local celebrities and personalities who want to come on and have fun.”

The theme of the first podcast was movie remakes and reboots. The second one addressed sequels. The third was about movie trilogies. The fourth, comedies. And the last was about science fiction.

This week’s podcast will be about romantic comedies. Then Wymer said they’ll likely circle back with film topics.

“Film is really one of the most popular forms of art,” said Wymer, who created his own film track at Ole Miss, taking classes from both the theatre and art departments.

Wymer said the podcasts are still being mastered, and they are selling ads for them. They will be released on SoundCloud.com when they are completed.