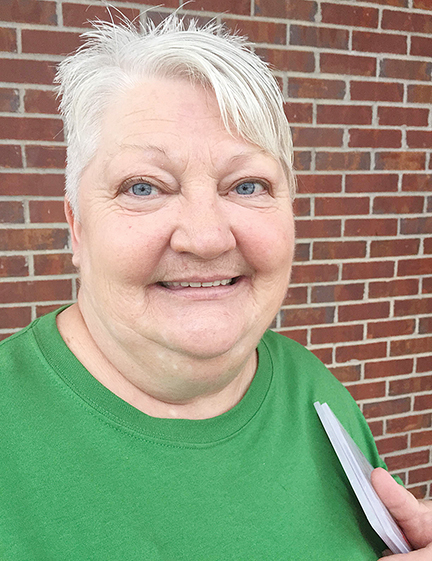 Anna Downs has worked in several fields of nursing.

Anna Downs, 53, grew up in Wichita, Kansas, and some of her earliest memories are running through Kansas wheat fields and playing on grapevines.

“We moved around a lot, and I ended up growing up in Arkansas,” she said Sunday evening while standing in front of the General Dollar on North Lamar Boulevard in Oxford.

Downs graduated high school in Arkansas and, as an only child, she later followed her parents when they moved to Mississippi.

In Mississippi, she became a nurse, a job she’s loved for the past 31 years. Today, she works in a psychiatrist’s office and lives in Oxford.

Downs said nursing has changed a lot over the years.

“Today, the record-keeping aspect of it is all digital, so that’s a new aspect of it that certainly was not a part of my career in the earlier days,” she said. “It was a lot more hands-on.

“Years and years ago, I believe you got a better on-the-job experience. That’s where I learned a lot of my skills, and that’s just invaluable. You can’t get that today.”

Downs said she has worked in almost every field of nursing.

“I have done the emergency room,” she said. “I’ve delivered babies, worked in doctor’s offices, hospitals, home health. It’s all very fulfilling, but what I’m currently doing at the doctor’s office I’m working at has been, by far, the most fulfilling of my career, and that is TMS.”

According to the Mayo Clinic website, transcranial magnetic stimulation is a “noninvasive procedure that uses magnetic fields to stimulate nerve cells in the brain to improve symptoms of depression. TMS is typically used when other depression treatments haven’t been effective.”

“It’s for people who have major depressive disorder,” Downs said. “It’s a new and innovative treatment that’s out there for that, and it has a very high success rate.

“It’s enjoyable meeting the patients, staying with them for six to eight weeks during the daily treatments, and watching them come out. They are re-energized and ready to join back into life again.”

Downs said mental health is a field that is understaffed and often misunderstood in Mississippi.

“It needs more people and just, overall, needs more attention,” she said. “Mississippi has one of the highest depressive rates in the country.”