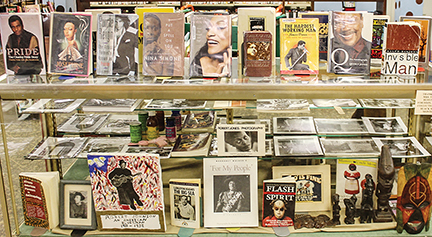 During the month of February, there is a special black history collection on display at the Oxford-Lafayette County Library.

Librarian Terry Buffington said she wanted to create an educational display that showcases others who have played a role in black history instead of notable figures like Rosa Parks and Martin Luther King Jr.

Walk into the library, and you’ll see the case at the end of the librarian counter.

It’s filled with books by many people that Buffington studied under while earning her master’s degree in anthropology at the University of Memphis.

“Most of these professors that I’m displaying, I’ve studied under,” she said. “Bill Ferris, who founded the Center for the Study of Southern Culture, turned me on to Zora Neale Hurston. Although people are most familiar with Their Eyes Were Watching God, she has a litany of writings, and is still one of the most widely published anthropologist in the world.”

The case contains books and photographs of others, such as James “Son” Thomas, a blues musician; books about advertising that show how African-Americans have been depicted throughout history, and the African origins of traditions like Mard Gras.

There are also photos of black school children.

“As you look at it, you can see the inequities and the disparages in education in the 1960s in the South,” Buffington said.

There are also books about singer Leontyne Price, musician Robert Johnson and others.

“I wanted to introduce the young people to something different,” Buffington said. “There were other people before Rosa Parks.”

Buffington has also created a section of children’s books in the library that focus on black writers, and she hopes to someday publish her own collection of oral histories.