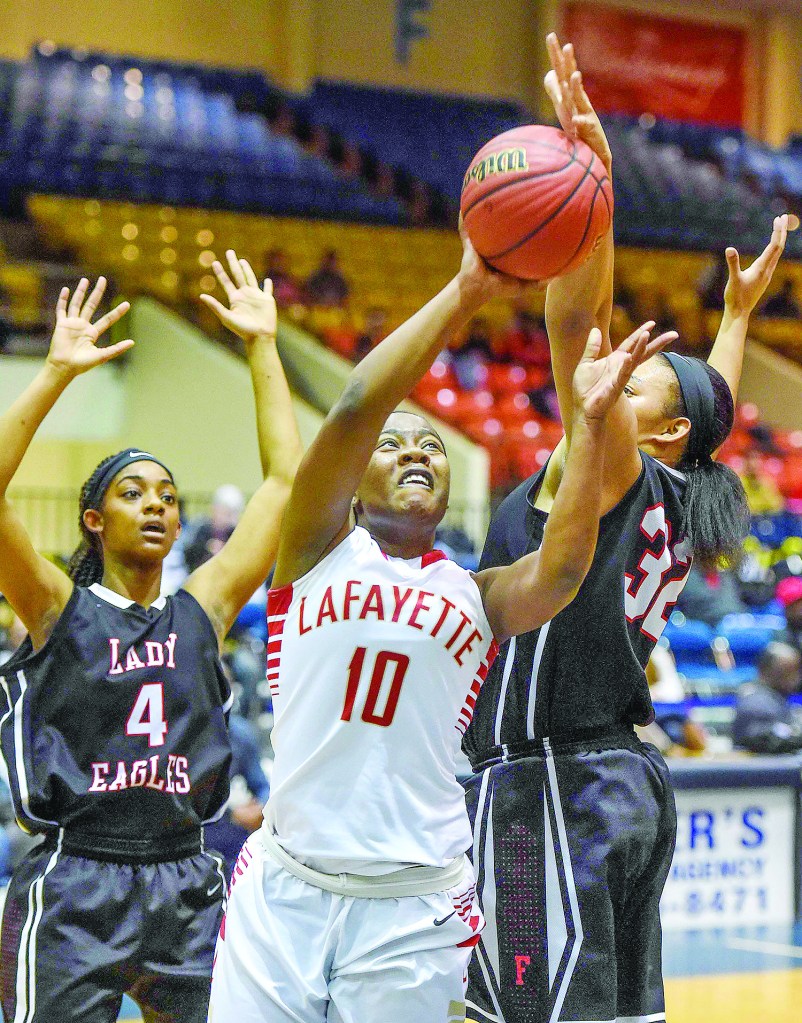 Lafayette’s Kemaria Kinds (10) tries to get her shot past Florence’s Jayla Williams (32) and MiKayla Patton (4) on Thursday in the MHSAA Class 4A state basketball tournament quarterfinals at the Lee E. Williams Athletics & Assembly Center on the Jackson State University campus. The Commodores’ season ended with a 65-63 overtime loss. (Chris Todd)

JACKSON — For three quarters, things were looking up for the Lafayette girls basketball team. Unfortunately for the Commodores, they have to play four quarters.

The final eight minutes saw Florence turn it on, leading to a 65-63 win over the Commodores in overtime of their MHSAA Class 4A quarterfinal game at Jackson State University on Thursday. The loss ended Lafayette’s season.

The Commodores (22-7) had a 42-35 lead heading into the final quarter when Florence’s Danyelle Lewis hit back-to-back 3-pointers to fuel the Eagles’ rally. From there, Florence (23-4) outscored the Commodores 22-15 to tie the game at 57 at the end of regulation.

“I knew there was going to be a run,” Lafayette coach Shayne Linzy said. “Florence is not here because they’re lucky. I was just hoping we could weather it. I felt like we did. We had an opportunity to win in regulation. You could feel it was getting closer. … We got to Jackson, and we go to overtime. Everybody’s got Florence ranked up there and Lafayette’s nowhere in the picture. I thought we did a great job representing our fans and our school.”

Lafayette looked to be in a position where it would not need to withstand a rally of any kind from Florence as the Commodores held the lead at halftime and even stretched the lead to nine points late in the third quarter.

After falling behind 15-14 after the opening quarter, the Commodores used a 19-6 rally to close out the second quarter for a 36-27 halftime lead. Shaniyah Buford was the only Commodore in double figures the first 16 minutes of play, scoring 16 points.

“We were in a good rhythm,” Linzy said. “Then those two 3s to start that fourth quarter kind of hit us, and we weren’t able to get back up from it. At halftime, I really felt in control. Now I knew we weren’t going to run away with it. That’s a good team we’re facing, and we’re going to keep working. I felt we were in good control of the game.”

“(Lewis) was tough,” Linzy said. “We did a couple things, trying to stop her. Putting a tall player on her, face-guarding her, trying to double or trap or switch. She made some great plays tonight. Tough, tough player and clutch. She made some shots a lot of people don’t make. That’s a credit to her.”

Buford finished with a team-high 30 points for Lafayette. Orianna Shaw was the only other Commodore player to finish in double figures with 11 points.

The Commodores return a large amount of their players next season, losing only Shelbi Buford and Shanquisha Jenkins to graduation. The taste of reaching Jackson is something Linzy hopes lasts with his players and is fuel to return next year.

“I’ve got a lot of girls coming back next year, and I’m hoping this game meant something to them and they want to come back and take that next step,” Linzy said. “In a few days, that’s going to be my challenge. We need to go one game further next year because I think that’s how you progress. We’ll give them some time out, and we’ll get back to work and say this is what we want to do.”