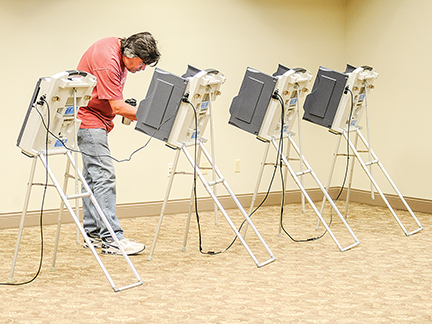 Bruce Newman Martin Calderwood votes in the primary election at the Oxford Conference Center this morning. Mississippi voters are casting ballots in the Democratic and Republican presidential primary, as well as voting for candidates in the U.S. House of Representatives.

As Oxford residents head to the polls today, we asked University of Mississippi students their thoughts on the presidential candidates and election.

Lovetta Oguhebe, 23, a communications sciences and disorders major from Nigeria, said she is not a fan of Donald Trump, who she described as a “tyrant.”

“(His behavior) really kind of gives an idea of how he would run the free world,” she said. “He loves to get the racists and white supremacists out of their corner and make it more prideful to spread hate.

“The way he does things has really gotten a lot of people to be more vocal about their hate towards people. It’s something that is really, really scary.”

Oguhebe said the United States will continue to become more of a melting pot, and statistics indicate that whites will eventually become the minority.

“It’s not something to be afraid of,” she said. “But what (Trump) does, he (creates) a sense of fear. But there’s no reason to fear being different. We are all different.

“We all have different kinds of blood in our veins. Even in the terms of Caucasians — everybody is not just white. People have come from Holland, Ireland, Poland. They are so different.”

Oguhebe said a lot of people say they are “color blind” when it comes to political issues, but she doesn’t like the term.

“People kind of want to be color blind to the whole matter, and people think that color blind is a good thing,” she said. “To say, you’re color blind, kind of comes off as — let’s say I’m trying to lose weight, and I’m eating Kale chips, but I’m constantly telling myself that it’s potato chips.

“I know I’m around lots of students who have different opinions than me,” she said. “I’m more on the Republican/conservative side, and it’s upsetting to see Donald Trump as a front-runner, because he’s just not a nice person, I don’t think. I think he does have a really good financial brain, and things like that, but he’s just not a good person.”

Panter said she doesn’t have a favorite presidential candidate.

“I like anyone other than Donald Trump,” she said. “I kind of like Marco Rubio. I think he has a lot going on. He’s really appealing to younger people like me, and I really like the way that he presents himself in front of people.

“He’s a nice guy, and he’s sincere. The things that he talks about; I just get the sense that he’s going to do the things he says he will.”

Panter said, while many are focused on social issues, she’s concerned about the economy.

“I really think there are some economic issues, as far as taxation and things like that that are more important,” she said. “If you fix those things, the social issues will get better. I’m definitely looking for someone who has strong opinions on how to fix the money situation in the United States.”

Jackson native Ainsley Smith, 19, has not yet declared a major or her support for a presidential candidate.

“You can tell (this election) is a big one,” she said. “This is one that’s going to make a difference in the way presidential elections go in the future. Personally, I care a lot about the environment, and there are a lot of people on the right side who don’t even admit there are issues with the environment, and I think that’s ridiculous.

“I think it’s extremely important that we do something about the environment, because we do live on the planet,” and we’re destroying it, she said.