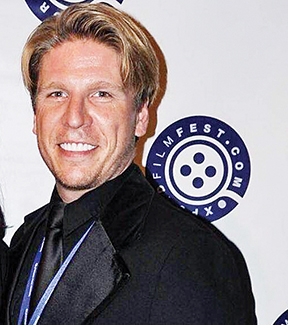 Andrew George just can’t stay away from Oxford and its thriving arts community.

George, who works for both the Oxford Film Festival and the Yoknapatawpha Arts Council, was at the Powerhouse on Saturday enjoying a bit of the area’s arts scene. After working all over the United States in the film and television industry, he recently returned to Oxford to finish a degree he started in international business and journalism.

George said his great-grandparents helped create Myrtle, a small community that he said is more like a “village.” His mother was a teacher at New Albany Middle School. George graduated from there. His family also owned department stores in New Albany, but he considers Oxford his second home.

“I’ve lived in Los Angeles. I’ve lived in New Orleans. I lived in Europe,” he said, “but the Velvet Ditch has always sucked me back in. I recently returned to Oxford about four months ago.”

George said he left the University of Mississippi twice to pursue jobs in film and television in Los Angeles, New Orleans and Colorado.

“I worked for A&E, the History Channel, FOX,” he said. “I’ve just been doing film and television, feature work, production work, and writing and producing.”

His first major film job was working on the set of “The Help.” Then jobs with A&E and the History Channel followed. George said he also worked on the reality talent shows “The Voice,” “America’s Got Talent” and “So You Think You Can Dance.”

“I started off in the art department as a production assistant where everybody starts,” he said. “I worked my way up from there.”

“We are shooting a film in New Mexico called “Sailboat,” he said.

George said he first became interested in film and television because his mother was involved in production with the University of Mississippi’s theater department. His mother also had a friend who lived in Memphis who was involved in a number of music videos and films.

“Being around that element of creativity,” influenced his career path.

“I’ve always tried to escape this town like the plague, but the Velvet Ditch has always brought me back for whatever familiar reasons,” he said.

“As the Oxford Film Festival grows, I’m going to continue to use Oxford as a home base. We are getting to the level where we’re not far from reaching where South by Southwest and Sundance have gotten. The next three or four years, it’s going to be amazing.”

George said two film magazines have rated the Oxford Film Festival as one of the top 50 festivals in the country.

“Ten Square came about because Oxford is 10 square miles,” he said. “And we’re doing shoots that are about 30 minutes to shoot, but it’s local people and artists, writers, filmmakers, business owners – people who have ties to Oxford with amazing stories to just show people the heart of this town.”