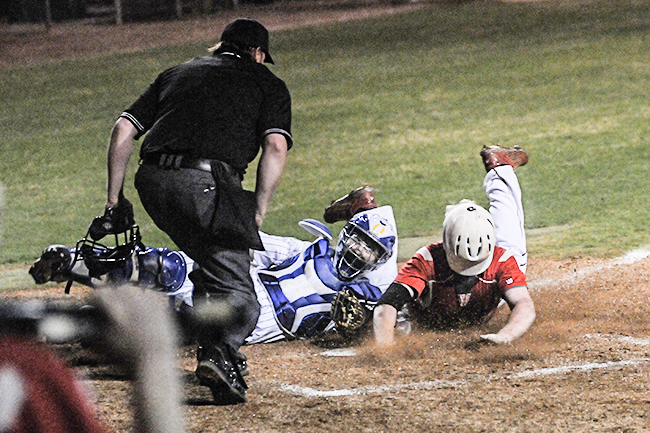 Oxford catcher Thomas Dillard tags out Lafayette’s Luke Gossett in the fourth inning of Thursday’s game in the Oxford Spring Break Tournament at Edwin Moak Field. The Chargers won 11-2 for their second win over Lafayette this season.

Whenever crosstown rivals Oxford and Lafayette meet, it is always a big deal. When the two schools met on the baseball diamond Thursday night, it had a little more riding on it.

Both Lafayette and host Oxford were looking for their first win in the annual Oxford Spring Break Tournament. Lafayette had dropped games to Arlington (Tennessee) and Tupelo while the Chargers fell to South Panola on Wednesday.

The luck of the Irish fell to Oxford on St. Patrick’s Day as the Chargers defeated Lafayette 11-2 to close out the tournament and earn the season sweep.

Jason Barber pitched a complete game for Oxford (9-4) while the offense came back early to provide the recipe for victory over the Commodores (4-6) for the second time in nine days.

Catcher Thomas Dillard provided the early fireworks, hitting a three-run home run in the bottom of the first. It propelled Oxford out in front to a 3-1 lead after the Commodores got to Barber first with a run in the top of the first.

Oxford added two more in the second inning for a 5-1 lead then used a six-run sixth inning for the winning margin.

“Most of our games all year long, minus (Wednesday), we’ve started hot then kind of cooled off,” Oxford coach Chris Baughman said. “We kind of did that again until about the sixth inning then turned it up a notch. The dugout turned it up a notch, and we kind of got back into it.”

Barber was business as usual on the mound for the Chargers, working seven innings of five-hit baseball and giving up only two runs, one earned, and racking up eight strikeouts. It was Oxford’s fifth game in seven days, and its bullpen was spared with its ace able to go the distance.

“He’s good. He was very efficient,” Baughman said. “When he keeps his pitch count down, we got a real good shot to win at the end of the ballgame. He gets his pitch count up, and that’s when we have to start looking around and saying, ‘Who can go? Who can come in?’”

Costly miscues
On the other side of the field, Lafayette sent out Reed Robinson and was able to settle in after giving up the five runs in the first two innings. He worked three innings of shutout baseball before three errors plagued the Commodores in the sixth to aid in Oxford’s big inning.

“We had a couple plays that we missed there that gave (Oxford) the big runs,” Lafayette coach Greg Lewis said. “We really were down to hardly anybody that could go. (Robinson) did a very good job.”

Dillard finished the night 1-for-1 with the three RBIs and was intentionally walked three times after. Designated hitter Houston Roth went 2-for-4 with two RBIs.

The Commodores finished the night with four errors, something that has been an issue which comes and goes with each passing game in the early season. Shortstop Luke Gossett missed a couple ground balls that wound up in the outfield, which allowed Oxford to cash in both occasions.

The outfield did its job as Tyler Williams, Will Christian and Xavier Martin made big catches to keep the Chargers from having any more big innings than they did.

“We just got to figure out how to get that (out) and be able to get off the field,” Lewis said. “We played three good teams. I think we found pieces of the puzzle, and their approaches at the plate got better. I felt we did a great job against Barber. He’s good.”

Bianco out
The win did not come without a cost for Oxford as the Chargers lost their everyday infielder-catcher in Ben Bianco to a shoulder injury early in the game. The sophomore slid back into first base during the first inning when he separated his shoulder on the move back to the bag. He was tended to by trainers and coaches before being helped off the field.

Baughman said Bianco will have an MRI today to see the severity of the injury but expects to be without one of his key relievers for the immediate future.

“He just reached back to the bag, and it was just one of those freak things,” Baughman said. “He had the steal sign, and he kind of got caught leaning then had to cross over and when he reached he hit the bag and it popped out of place on him.”

OUT OF WHACK: Chargers struggle in all facets in…