Some stick around for spring break in Oxford 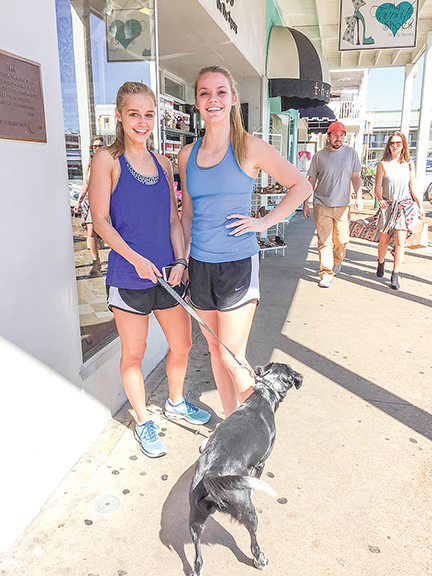 This week has proven to be excellent weather for dog-walking. We found a number of people on the Square walking their dogs and enjoying the sun who shared with us their plans for spring break.

“We were thinking about making a road trip for a couple of days,” said Eline. “But if not, we will probably just do our errands. We have a list that we wrote down of stuff we were going to do. It’s kind of like a bucket list, since we’re here anyways.

Birmingham native Kaylee Beauchamp, 25, is a UM law student. She was found walking her dog, Sanford.

“I’ll be studying,” she said. “I’ll be writing an appellate brief and studying for my law mid-term, and getting back in shape because I haven’t run in two months.”

“We are actually going to be in town for the week,” he said. “We’re not going anywhere, just enjoying the nice weather. We’ll probably go for walks with our puppy.”

Oxford resident Jane DePriest works as a med-tech at a medical clinic.

“I don’t have a spring break,” she said. “I’m just staying here working. I’ll probably be seeing people who are on spring break.”

Memphis native Lynecia Christion, 21, a journalism student, was out on the Square with her camera.

“Right now, I’m working on projects for schools,” she said. “I’m trying to do a project piece for The Daily Mississippian and work with the media at the school. I’m just walking around looking for news.”

Christion said she may go out of town and visit relatives during spring break.

“I’ve been here two weeks,” he said. “My wife was in an accident. We’ve been to three hospitals and rehab. Instead of going back to a house that was not accessible, we had planned to move up here, so we just moved it up a little earlier.

“So we are landing in Oxford as we speak right now, trying to acclimate ourselves and get our feet on the ground.”