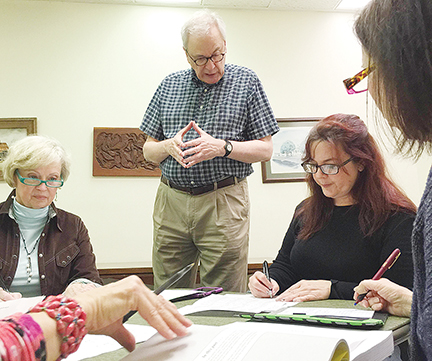 David Howorth, 69, stands over a group of women in the local library who ask him rules about the game of bridge and compare notes about last week’s scores.

“It’s a wonderful opportunity that Oxford would have a place and an instructor who would give bridge lessons to people,” said Austin native Sallie Van Devender, who lives in Oxford. “And the best part about it, is everybody can learn the same bidding, and you’re my new friend, Kathy, so we’ll be playing together.”

Florida native Kathy Fox, who sat beside her, said she decided to come to the bridge classes because she’s new to Oxford.

And Louisiana native Kaye Carroll, who lives in Oxford, said she came to keep her senses sharp.

“Some of us are getting older, and this is a good thing for our minds,” she said.

Howorth teaches bridge lessons every Sunday beginning at 2:15 p.m. at the Oxford library.

“Like many people my age, I learned bridge from my parents when I was very young – almost too young to remember when it was,” he said. “Almost everyone in my parents’ generation played. Having another couple over for an evening of bridge was a common form of entertainment back then.

“Sometimes my aunt (the late Vasser Bishop of Oxford) would come visit us when my family lived in Memphis. Since bridge requires four players, I would frequently be summoned to sit as the fourth in a game with my parents and aunt.”

Howorth moved from Memphis to Oxford when he was 16. He went to college in Connecticut, came back to Oxford and attended law school, and then spent his professional life, first in New York City, then in Portland, Oregon. He returned to Oxford when he retired.

“My four brothers are all younger, so my parents didn’t have the same urgency about teaching them as they did me,” he said. “I was already there as a fourth. The next two in line did play some when they were young, but I’m not sure the younger two ever played. None of my brothers play today.”

More to the game

Howorth said when he arrived at Yale in 1965, he quickly discovered there was a lot more to bridge than his parents and their friends had ever imagined.

“There were some very good players there, and we were probably the last age group in which pretty much everyone played bridge,” he said. “My class was the last all-male class at Yale, so bridge and poker were the main forms of spontaneous on-campus entertainment on weeknights.

“I improved by playing against very good players who were willing to play against me, provided we played for a stake. The dollar amounts seem ludicrously small now, but in those days, they were significant, at least to me.

“And when I got to be good, I was the one who insisted on playing for money, so on balance, my college bridge-playing years were profitable.”

Howorth said bridge is a partnership game. Social players of his parents’ generation changed partners during the course of the evening, so by the end, everyone played with everyone else as a partner.

“During my freshman year, I partnered with someone I met on my first day or two at college,” he said.

“Sometime early on, a pair of upperclassmen who had just relieved us of a few dollars at the bridge table, took me aside privately and said, in effect, ‘You’ve got a talent for this game, but you’re never going to get anywhere with that guy as your partner. You need to find someone else.’

“My first reaction to this was that it was sneaky psychological warfare, but I started paying more careful attention to my partner’s play, and I decided they were probably right.”

“There’s really no good way to do it,” he said. “You feel like a sneak while you’ve got your eye on someone else, and then like a heel when you finally get around to saying, ‘I don’t really think we have a future together.’”

But Howorth did switch, and had a successful bridge partnership.

“We won an event that enabled us to represent Yale in the Intercollegiate Bridge Championship,” he said. “At the regionals of that event (for colleges in eastern Canada and New England), we came in second – a nice finish, but in those days only the top pair from the region as moved on to the nationals.”

Howorth said the year after he graduated, Yale went co-ed, as did almost all of the old single-sex colleges at that time. Even in the colleges that had been traditionally co-ed, co-ed dorms became the norm in the 1970s, he said.

“Co-ed dorms were really the downfall of bridge on college campuses,” he said.

After college, he played bridge only intermittently. He was too busy practicing law.

“When I retired and moved to Oxford, I was surprised at how few players there were,” he said. “I would have thought that a college town would have a large bridge-playing community. Not that I expected many students to play these days, but I thought it might be something that faculty members did.”

Howorth plays in tournaments now, but his three regular partners, including his old college partner, live in the Northeast.

“We can only make two or three of the bigger tournaments every year,” he said. “But the Internet has made it easy for us to play together from afar in between tournaments. I usually play two games a week on the Internet with people I know from my days in the Northeast.”

Meanwhile, Howorth said he’s tried to do something to increase the number of bridge players in Oxford.

“The first thing I did was organize a student bridge club at the university,” he said. “In the first year, despite spending a lot of effort on it, I was only able to rouse four players, all graduate students.

“They were able to play in the regionals of the intercollegiate tournament, but, like me, they didn’t quite make the cut to move on to the nationals. Two of those players, Greg Earnest and Meaghin Burke, have since married. They live in Oxford and continue to play bridge.”

When he first tried organizing a student team at Ole Miss, Howorth said he took the steps necessary to become “certified” as a teacher by the American Contract Bridge League (ACBL).

If you search for bridge teachers in Mississippi at the ACBL web site, you’ll find him. He is the only one in Oxford, and one of only 16 in the state.

“When I first moved to Oxford, there was a bridge teacher established here, Ann Gill,” he said. “I never wanted to ‘poach’ Ann’s students, so I never started offering lessons generally (i.e., to anyone other than Ole Miss Bridge Club members) until Ann moved away a couple of years ago.”

Howorth said bridge is a card game for four, played in partnerships of two. It’s the most sophisticated of the “trick-taking” games, a family that includes Whist, Spades, Euchre, etc.

Game of a lifetime

Howorth said there’s a steeper beginning learning curve for bridge than for any other game he knows of.

“As I tell my students, anyone can learn to play chess after 15 minutes spent learning how the men move,” he said. “After that, you can play against another chess beginner and have fun, even though you’re playing really bad chess. You can’t begin to play bridge, even really bad bridge, without significantly more instruction than that.”

“If they stick with it, they’ll learn a game they can enjoy the rest of their lives,” he said. “And, in fact, there’s some evidence that playing bridge helps prevent mental deterioration as we age. Once you start playing, there are constant new insights.

“You realize that there is some subtlety to the game that you had previously been unaware of. Believe it or not, this happens time and time again. Even the best players say that it continues to happen to them. The game is inexhaustible in that respect. It really is a never-ending journey.”