Spring time on the Square 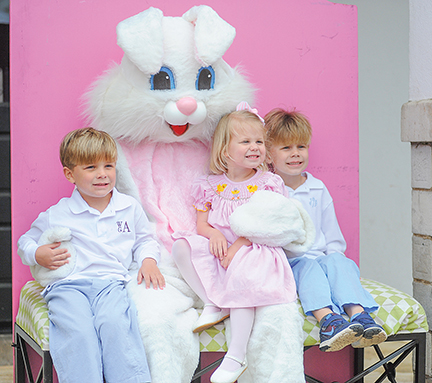 Saturday was a chilly spring morning, but that didn’t stop a number of parents from bundling up their little ones and bringing them to the Lafayette County Courthouse to meet the Easter Bunny.

The Easter Bunny, whose fur protected him from the cold spring weather, greeted children and parents as part of the Oxford Square Alliance’s annual Spring Open House held on the lawn of the courthouse.

As the large rabbit stood near the courthouse steps, a photographer was positioned in front of him to capture the meeting for parents who stood in line.

Louisiana native Andi Bedsworth, who has lived in Oxford for 12 years, runs an art program for children called Art to Go. She was at the event Saturday standing behind a table with egg-shaped cutouts, colors and markers.

Julie Spears brought her sons Jack, 4, and Samuel, 2, to the event. The boys stood behind the table and used their creativity to create a colorful Easter egg drawing.

“Jack wanted to see the Easter Bunny,” said Spears, “and we came just to enjoy all of the festivities while we were here.”

Spears admitted that both children were a little afraid of the Easter Bunny. That’s why she and her husband were in the picture.

April Wells, an Oxford resident, stood in line holding her baby daughter, Anna Kate, who was bundled in a blanket awaiting her turn with the Easter Bunny.

“I thought it would be fun for her,” she said. “This is her first Easter, and it lets her to socialize with other adults and kiddos.”