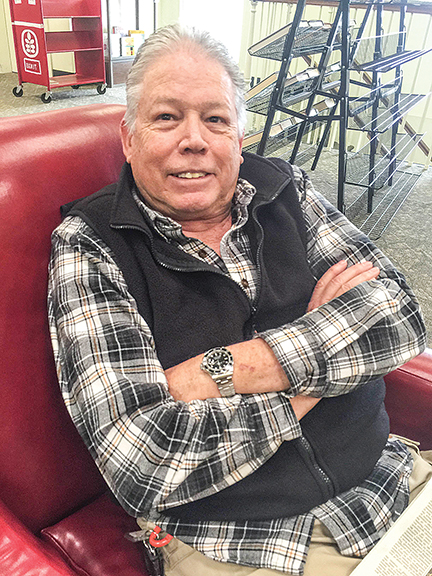 Gary Davis was found reading the newspaper inside the library. He is part of a FEMA team working disaster recovery efforts.

Davis, who was in the library Saturday, said he’s in the area with a team involved in disaster recovery work because of the tornadoes and flooding that happened in Mississippi last winter.

“It didn’t affect Lafayette County so much, but it sort of was an arc running (through)12 or 13 counties,” Davis said. They included Coahoma, Tallahatchie, Tippah, Marshall, Itawamba, Monroe and Clay.

Davis said there was more tornado damage in Marshall County around Holly Springs, high winds in other places, and more flooding on the east side of the state, particularly in Itawamba and Monroe counties.

“I’m in public assistance, where FEMA provides assistance for grants and help for state and local governments to recover from tornado damage,” he said. “It’s hard for a local government to build in a budget for a storm that may never happen, so they don’t have the money set aside. So quite frankly, a lot of those counties that I’ve been in, they don’t have the money, period. It’s fairly poor in some of those counties.”

Davis, who lives in Virginia, said he has never personally experienced a tornado.

“You get some wind and some hurricanes and some flooding occasionally, but I’m surprised at all of the tornadoes out in this part of the country,” he said.

Davis said he arrived in January and saw that Holly Springs had been hit pretty hard.

“I said ‘Man. I’ve never seen this kind of damage before. It’s new to me,’” he said. “Back East, a tornado is an odd occurrence. I won’t say it doesn’t ever happen, but it’s not as widespread as it is out here in the South and the Midwest.”

Davis said he’s experienced an earthquake, but not a tornado.

“I lived in California for several years, and it was a mild earthquake, like 5.5 on the Richter scale,” he said. “It made the doors and the windows shake. Farther Northeast, they had some building damage. That was scary to me. I couldn’t believe it.”

Harmontown EMRs help one person at a time