Bates hopes to plant the seed of learning in students 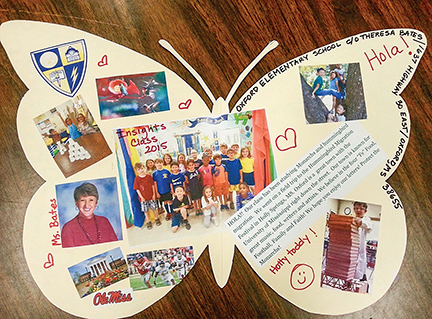 Oxford Elementary School teacher Theresa Bates believes in bringing creativity into her classroom, and two of the projects she has introduced to students involve studying the migratory patterns of hummingbirds and monarch butterflies.

“We began the year with a unit on migration,” Bates said. “Children learned about the migratory patterns of humming- birds. They attended the annual Strawberry Plains Hummingbird festival in Holly Springs. While there, many were lucky enough to hold a hummer and feel his heartbeat.”

Bates said the children studied and applied skills in life science, Earth science, physical geography and mathematics to figure out distances traveled by birds that she said should be returning any day now. The children also wrote and illustrated descriptively vivid poetry about hummingbirds and flew a scaled “500 miles” down the halls in a hummingbird dance.

She said children then collaborated with the Journey North organization through the Annenberg Foundation. They became cultural ambassadors, sharing their love of Oxford with children at a school in Mexico. The children, who live near the 12 mountaintops, will become stewards of the special region.

After studying migration and monarchs, Bates said her students sent letters, photos and life-sized monarch artwork in a large symbolic butterfly containing a greeting from Oxford along with a check to support the efforts of sustaining the monarch population to the Journey North organization.

“This organization then sent an educator to the schools in the region to deliver the symbolic monarch offerings from the United States to the children in small villages in Mexico,” she said. “In Mississippi, only my classroom and one other gifted group in Holmes County participated in the Symbolic Migration.”

Bates, 54, is a Nationally Board Certified Teacher with a master’s degree in education and an empha- sis in math and science. She teaches gifted studies, a program known as “Insights,” and the second grade at Oxford Elementary School.

Bates has been teaching for more than 15 years.

“However, I have been teaching stuffed animals, chil- dren and cows since I was a child,” she said. “Along the way, I have had several creative, innovative and loving teachers while growing up in California who had a tremendous impact on my love for learning and my choice to become a teacher.”

Students have also learned about Cinderella stories from around the world, holidays from around the world, and the American Revolution. They participated in an oral history project, a photography project and a sign language program with the university. Bates said she hopes to help the children become conscientious stu- dents and critical thinkers.