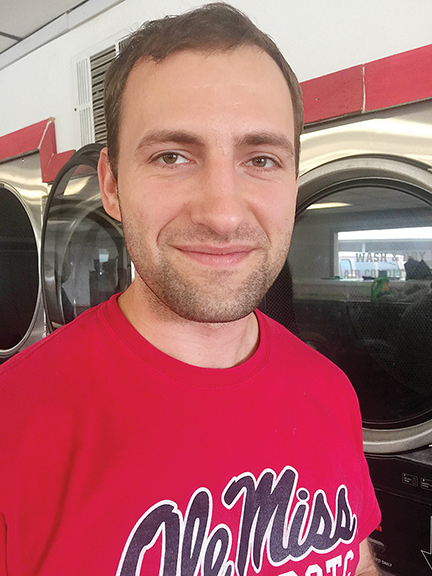 Crystal Springs native Joshua Edwards grew up in the community that is located about 20 minutes from Jackson.

His dad worked in a factory, and he attended public school.

“It’s a small place of about 8,000 people,” he said this weekend at the laundromat on North Lamar Boulevard. “A lot of churches. Not a whole lot of other activities. We didn’t have a Walmart.

“It was kind of one of those little communities where the small business elite kind of kept Walmart out. It’s growing now, but when I was there, there wasn’t much going on there.”

Edwards attended high school in Crystal Springs for a short time before he became a student at the Mississippi School for Mathematics and Science in Columbus.

“I’ve been gone from my hometown since I was 17,” he said. “It’s one of those places that I think when you leave, you don’t necessarily go back to.”

“I didn’t know how I was going to pay for school, and that looked like a good option,” he said. “And I could have my pick of what I wanted to do. I became a medic.”

After training, he ended up at University of Mississippi because of a girl he met. He later met another girl from Oxford and married her.

Now, he’s an officer in the National Guard, who has served in Afghanistan. And today, he teaches high school biology in Coffeville. But Edwards said he’s at a professional crossroads and may move.

He said teaching is challenging.

“A lot of people just aren’t selling the need for biological sciences,” he said. “I feel like I’m cramming it down their throats, and they don’t really care about it. And then I’m kind of measured on how well they do. Nobody really wants to do well in it, they just feel like they have to.”

In the future, Edwards said he’d like to possibly teach in a community or school with a science focus.