Watts has seen a lot in her 103 years 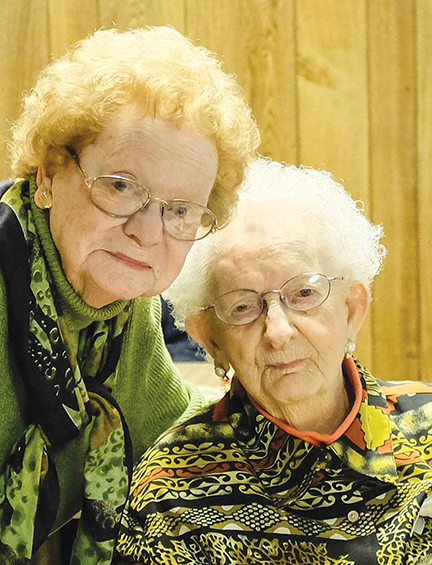 Thea Mildred Watts, right, celebrated her 103rd birthday with among others, her sister Eddie Lou Ray.

Thea Mildred Watts, 103, vividly recalls the winter her baby brother died. She has told the story numerous times to her daughter, Linda Swearingen.

“He had been sick during the winter with a bad head and chest cold,” Swearingen said. “There wasn’t really any medicine. There was a Dr. Waite in the community, so if you were really, really bad sick, you had to go to his house and tell him to come to your house.”

As the baby gasped for breath, Watts’ older brother rode his horse to Dr. Waite’s house. The doctor told her brother he needed time to hitch up his horse and buggy, but her brother convinced the doctor that there was no time to spare and made the doctor ride with him on the horse back to their home.

“Dr. Waite got on behind him with his black satchel, and they rode back as fast as that horse could go with two big men on it,” Swearingen said. “He got there and they doctored him.

“He was by the fireplace and as warm as grandma could keep him, but he had pneumonia. He died during the night. It’s so sad — poor little boy had gotten sick, and they did all they could, but it just wasn’t enough.”

The story is just one of many that Watts, who celebrated her 103rd birthday March 19 with a party at the Beacon in Oxford, still remembers.

Swearingen said her mother is a Lafayette County native. Later on, she and her husband, Buck Watts, moved closer to Oxford, but they eventually returned to the Philadelphia community.

Growing up on a farm

Growing up, Watts was one of about seven children, who each had chores on the family farm. Her parents also made sure that she and her siblings were studious. All made good grades, and when she completed the eighth grade in the Philadelphia community, Watts went to College Hill for high school.

“You could take a test back in those days, and if you passed it, you could get a teaching certificate, according to how well you made on a test,” Swearingen said. “Somewhere in the 1930s, she got a teaching license.”

Swearingen said her mother and a friend studied together and took the teaching license test together. The best friends had attended grade school together, and because they had studied together for the test, what one knew, the other did also.

“When they went to take their test, they didn’t sit by each other,” Swearingen said, “and they made exactly the same thing on the test. The teacher accused them of cheating.”

Despite the untrue accusations, the test administrator could not prove that cheating occurred, and both girls obtained their teaching licenses.

Watts taught with her oldest sister, Nettie Mae Field, in a small school. Her other sister taught music.

Like everyone else in the community, the Watts family farmed.

“Mother and I gardened,” Swearingen said. “We canned everything. We didn’t freeze things back then because we didn’t have a freezer. We had a cellar. We had a smokehouse for when daddy killed a calf in the winter and had the meat butchered. We had several hogs and two cows that were milked.

“We had a cow that would walk up twice a day to a peach tree. This cow didn’t need a rope. It just stood there. Mother would sit on her pail and milk the cow. The cow would go off and come back again at night – an automatic cow!”

Swearingen has only one brother, who is 13 years older than she is.

She describes her mother as meek and mild mannered – a woman who grew up in the country and worked hard. Buck Watts plowed the field, and her mother planted and took care of the rest. She didn’t work outside the home until Swearingen was in high school.

“The factory in Oxford was built,” she said. “They were asking for people who knew how to sew to come up there and be seamstresses. They made shirts. It was the shirt factory. Later, they made trousers.

“They had a carpool. She got to ride in a carpool with a lot of ladies who lived on the edge of Union County. Her shoulders would hurt at night. After I got out of junior college, she quit.”

Watts may be the only one in her family who has lived past 100, but her sister Nettie Mae Mayfield reached her 90s.

Swearingen said the backroom at the Beacon was packed for Watts’ birthday party.

Watts is also known in the community because she worked as a Lafayette County election commissioner for years.

Martha Cooper is one of Watts’ nieces. When Cooper was in college at Ole Miss, she often stayed with Watts’ family on the weekends.

“I felt like I was home because they were so kind to me,” she said. “That was one blessing I really had, because if you are going to school and don’t know a soul, they would pick me up from campus and take me to eat.”

Today, she said Watts doesn’t leave the house often, but she enjoys visitors. She also has macular degeneration.

“She read until she just could not see anymore,” said Swearingen. “She would read with a flashlight to read The Oxford EAGLE, and I would read it to her. She can see to recognize people, and she can kind of see the TV enough to know, but there’s nothing on TV these days that she is interested in. Lawrence Welk used to be one of her favorite programs.”

Another interesting fact about Watts is that she loves football.

“She obviously didn’t even play football with her brothers sisters,” she said. “But she actually understands it pretty good. She loved Archie Manning because he was a Mississippi boy who did good, and she always wanted to watch who he was playing for. And she loves the Saints.”