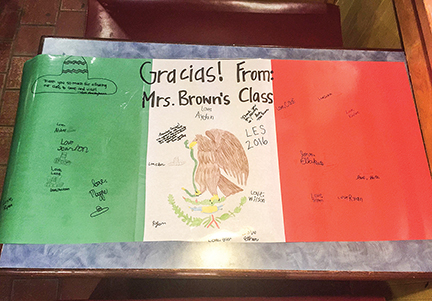 LaReeca Rucker Students created this flag and signed it in thanks for opening up their restaurant to the group.

They didn’t physically cross the border, but they were intellectually transported to the country through their studies, and Friday, they ended the lesson with a trip to El Mariachi Mexican, where they feasted on authentic Mexican cuisine.

“I have a wonderful student teacher, Ashley Mooneyham, and part of her five-day lesson was to teach on Mexico,” Brown said. “We have a student in the class whose dad owns a restaurant, and we thought it would be a great opportunity to culminate the event and eat some Mexican food after we’ve learned about Mexico.”

Students also used technology to learn more about the country.

“They got to do some research on their favorite facts about Mexico,” she said.

Students also had fun creating the flag of Mexico together.

“They really liked getting to use the computer to find interesting facts about Mexico,” she said. “One of the main things we’ve learned in school is to try to teach them about diversity, so I really think it would be cool if they remember some of the things that come from Mexico that we use every single day.”

Laura Young, a teacher’s assistant, said she also hopes the students remember the lesson later on in life.

“I hope they have more understanding of other cultures and diversity, and that they won’t be afraid to meet people and greet them, embrace the cultures,” she said.

“They would throw a ball through a hoop way up high, and it would end on the shadow when the sun goes down,” she said.

“That was the most fun,” he said. “And we looked up stuff about Mexico on the computers.”

Aydan Vazquez, 7, said his father owns the restaurant in which the children ate Friday.

He said “making a flag and searching the computer for facts about Mexico,” was the most fun.