Upping stone at Visit Oxford has a unique history 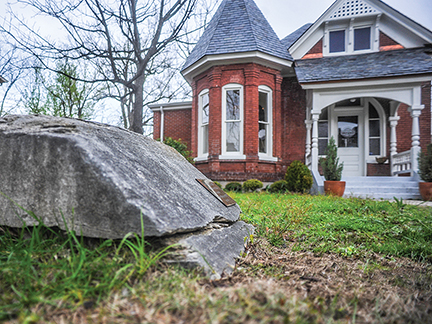 If you visit the Visit Oxford building at 1013 Jackson Avenue East, you’ll find a historic landmark that was once used to help the owner of the building get on his horse.

Katie Kaiser, visitor services coordinator, provided information that says the current building was used as a law office by James Stone and Sons from 1905 to 1962. James Stone was the father of Phil Stone, William Faulkner’s mentor.

“In 1905, James Stone, Phil Stone’s father, purchased the building with his then partner, Clarence Sivley, who later became general counsel of the Illinois Central Railroad,” the information reads. “The building appears in William Faulkner’s “The Sound and the Fury” as a result of Faulkner’s friendship with Phil Stone. Secretaries who worked here typed Faulkner’s early novels.”

Local historian Jack Mayfield said James Stone moved to Oxford in the late 1890s from Batesville to open up his law office.

“His wife had lost a child because of the bad weather and diseases and things down in the Delta at that time,” Mayfield said, “and they always thought that the Hill Country was better for your health, so they decided to move to Oxford.”

Stone bought the building for his office.

“He had a Tennessee walking horse,” said Mayfield. “His name was Bob. He would ride his horse to work every day.

“He had a groomsman who worked for him, who would take the horse and put it in the parking lot behind the building where the parking lot is now. And he would later bring the horse around. And they would use that stone in the morning and evening when they went home.”

Mayfield calls it an upping stone. He said the most recent owners of the building added a plaque to the stone to note its historic significance.

Mayfield said there were several lots around town at the time in which people could “park” their horses that they rode to town.

He also recommends a book about Phil Stone called “Phil Stone of Oxford: A Vicarious Life,” by Susan Snell.