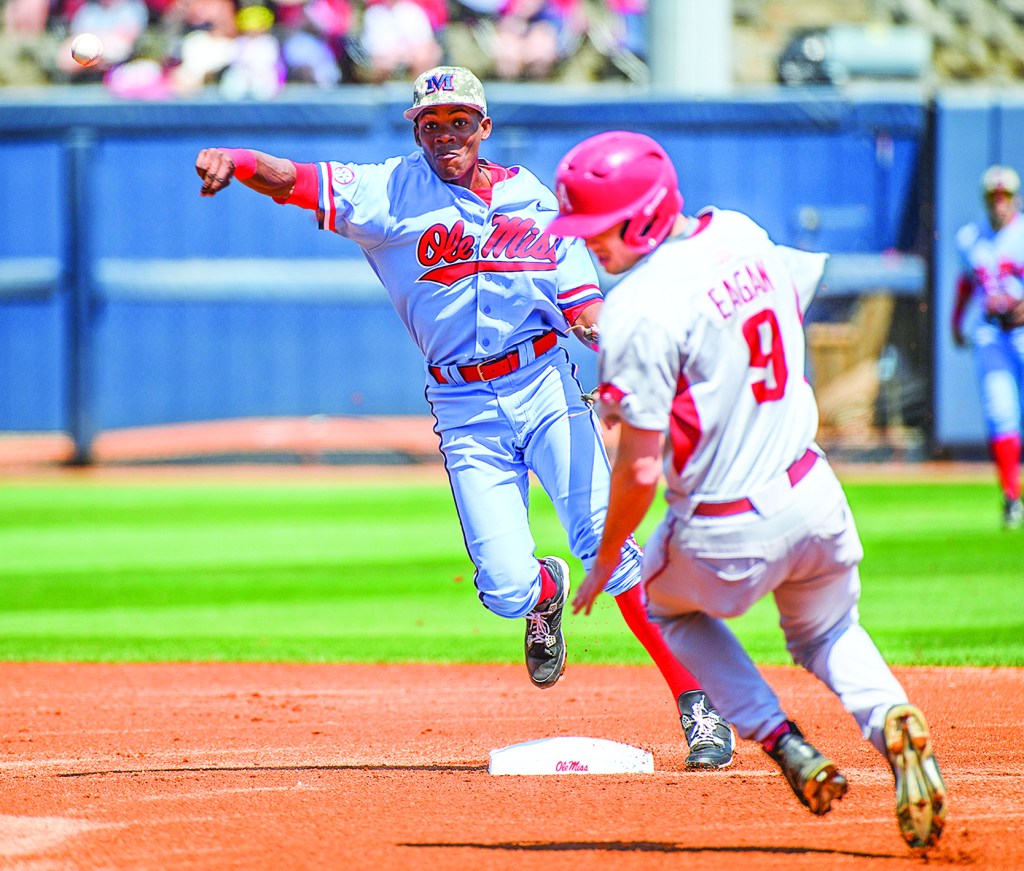 Ole Miss shortstop Errol Robinson throws to first base past Arkansas’ Clark Eagan during Sunday’s game at Oxford-University Stadium. The Rebels won 8-7 to complete their first Southeastern Conference sweep of the season.

A week ago, the Ole Miss baseball team was in the midst of a five-game losing streak. Fast forward seven days, and the No. 14 Rebels are now riding a five-game winning streak after defeating Arkansas 8-7 on Sunday at Oxford-University Stadium.

It completed Ole Miss’ first Southeastern Conference sweep of the season and its first since May 7-9, 2015 when the Rebels swept Mississippi State.

It was another first-timer on the mound as regular closer Wyatt Short got his first SEC start as a Rebel. The junior worked 4.1 innings, giving up three runs, two earned, on six hits. He struck out one while walking two Razorback batters.

“Honestly, I wasn’t feeling my best today,” said Short, who found out Saturday night he was getting the start. “I made some pitches, and the guys behind me made some plays, so thankful for that. My arm wasn’t feeling the best. (Head) coach (Mike) B(ianco) stuck with me and so did the team.”

The Rebels (25-7, 6-6 SEC) hung a crooked number in one of the first two innings for the third straight game of the weekend as they plated four runs in the second inning for the early 4-0 lead. First baseman Will Golsan hit a two-RBI double to score designated hitter Michael Fitzsimmons and catcher Henri Lartigue while center fielder J.B. Woodman hit his fifth home run of the season, a two-out, two-run shot over the right-field wall.

Golsan and Woodman finished the day 2-for-4 with Golsan recording four runs batted in and Woodman having two
.
Keeping it close
After falling behind those four runs, Arkansas (20-12, 4-8) plated three runs in the fifth to run Short out of the game and climb back to within one. A wild pitch by Short scored Razorback right fielder Jake Arledge while a groundout from left fielder Luke Bonfield scored center fielder Clark Eagan. First baseman Cullen Gassaway hit an RBI single to score third baseman Carson Shaddy to make it 4-3.

The yo-yo game continued as Arkansas fell behind 6-3 after the Rebels answered with two runs in the home half of the fifth but saw the Razorbacks make it a 6-5 game with two runs of their own in the seventh.

The Rebel bullpen did its job, making sure the game was never tied or saw Arkansas take a lead with Fayetteville, Arkansas native Andy Pagnozzi, former starter Chad Smith and Will Stokes combining for 4.2 innings of relief work. The trio gave up four earned runs and struck out five.

After losing his Saturday starting position, Smith worked 1.2 innings, including a clean inning in the eighth, but did give up a two-run home run to shortstop Michael Bernal in the ninth to make it an 8-7 game with only one out.

“For Pags to come in and obviously from Fayetteville, you’re not sure how the emotions are going to work sometimes,” Bianco said. “He pitched like he’s pitched all year and was able to locate his fastball. … Smith was terrific. First appearance out of the bullpen and did what he was supposed to do. I’m proud of Smith, proud of the way he competed.”

Ole Miss will host Southern Mississippi at 6:30 p.m. Wednesday, who the Rebels beat last week in Pearl at Trustmark Park, before taking a trip to Tuscaloosa, Alabama, for a weekend series against the Crimson Tide.