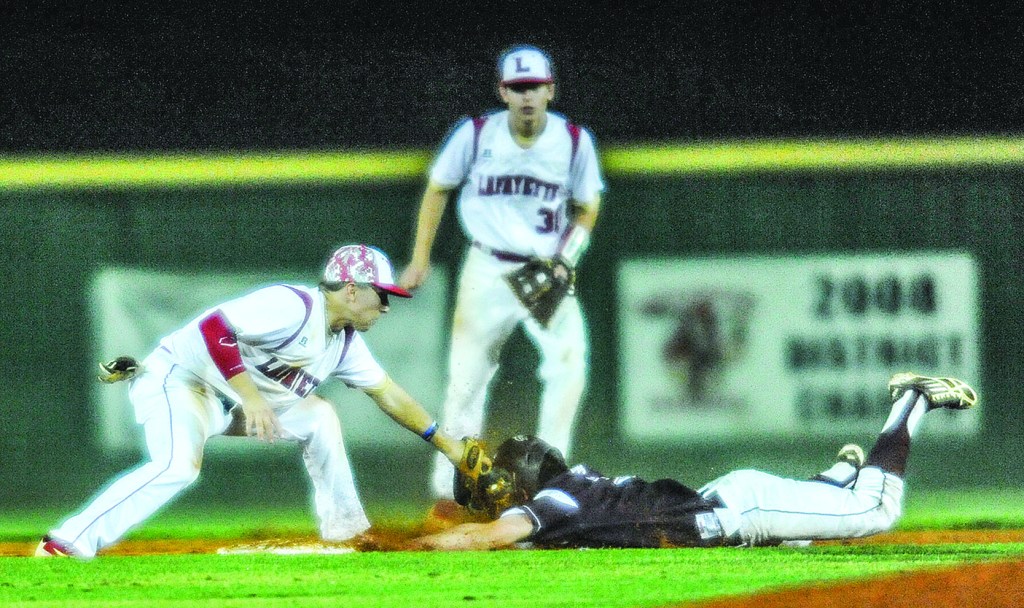 The Commodores were swept out of the MHSAA Class 4A playoffs with a 3-1 loss at W.V. Brewer Field. The game was much more competitive than Houston’s 12-3 romp in the series opener two days earlier, but the Hilltoppers plated all of their runs in a sixth inning that featured miscues and some controversy.

“I wanted to go back over there,” Lafayette coach Greg Lewis said, referencing a  potential third game back at Houston today. “They may have beat the dog out of us over there, but I at least wanted to go try. And we’ve done a really good job lately of really protecting our place and playing good games. We did again tonight. We just didn’t quite get it done.”

With the Commodores (13-15) clinging to a 1-0 lead, Denver McQuary led off the sixth with a triple to center off Lafayette starter Mack Bishop after Tyler Williams lost his footing while measuring up the fly ball and scored on Wes Parker’s RBI single. Bishop got Luke Hancock to roll one over to first baseman Khalil Martin, but the ball kicked off Martin’s glove and into shallow right, allowing Parker to race home to give the Hilltoppers (25-3) the lead. Houston expanded it when Clay Hillhouse drew a bases-loaded walk five batters later.

The Commodores’ frustration peaked when Lewis was ejected once Lafayette got out of the inning after an argument with the second-base umpire stemming from a call Lewis believed the umpire missed on Parker’s stolen base prior to scoring the go-ahead run.

Houston coach Scott Gann said he didn’t have a clear view of the play from the third-base dugout.

Little offense
Both pitchers controlled the tempo early as the teams combined for just four hits through the first three innings. Bishop went the distance in the loss, scattering three hits while striking out nine and walking four. Houston’s Colton Peel allowed one run on six hits while fanning six in five innings of work.

But the Commodores got to Peel first in the bottom of the fourth. Williams singled with one out and moved to second on Bishop’s groundout before Lewis went to his bench for pinch-hitter Bryce Hertl, who lined the first pitch he saw to the gap in right-center plating Williams for the 1-0 lead.

Lafayette had a chance to add on in the fifth after a single and two walks loaded the bases, but Peel got Williams swinging to end the threat before the Hilltoppers took advantage of their opportunities in their next at-bat.

“They’ve got great arms out there and a great defense,” Lewis said. “Mack did a heck of a job of keeping us there, and he has in the last few games he’s pitched here.”

McQuary, a Mississippi State signee, came on in relief for Houston in the sixth, striking out six of the seven batters he faced to bring Lafayette’s season to an end.

“You can kind of feel it,” Gann said. “It’s a little tense, the fans are on edge, the kids are a little bit on edge. In tight games like that, it just kind of amplifies everything. It was a really good atmosphere.”