Pride Parade rolls on the Square 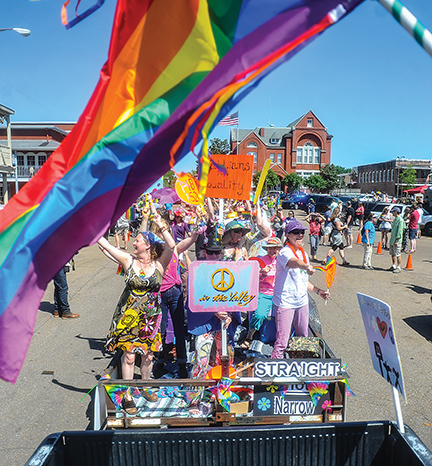 Bruce Newman The inaugural LOU Pride Parade rolls through the Square on Saturday. The parade was the first of its kind in Oxford since the National Organization for Women sponsored a gay rights parade on June 6, 1992.

A rainbow appeared in the parking lot of the Gertrude C. Ford Center for the Performing Arts on the University of Mississippi campus Saturday afternoon.

A crowd, many dressed in rainbow colored clothing and headbands, gathered to create floats for the first Lafayette-Oxford-University Pride Parade. Some carried small rainbow flags in their hands as another float drove by playing a cover of Cyndi Lauper’s popular song “True Colors.” Others wore T-shirts with the word “Love” printed on them – the “O” replaced by a rainbow heart. Other T-shirts read “Mississippi is for everyone.”

Some who attended the LOU Pride Parade pushed and pulled strollers. One featured a child’s rainbow drawing with the word “Equality” written underneath it. The little girl inside held a rainbow-colored balloon shaped like a butterfly.

One of the first groups to arrive affixed signs to their float that read “Water Valley for Equality.” One read “Keep the Government Out of Our Bedrooms,” while another called for the repeal of House Bill 1523, a new Mississippi law effective in July that gives business owners the right to refuse service to customers based on their religious beliefs.

California native Ramona Bernard, 56, came with a crew from Water Valley’s The B.T.C. Old Fashioned Grocery to participate in the parade and support Chef Dixie Grimes.

“Everyone loves Dixie and her food, and she is very out and very proud,” said Bernard. “We are all sort of a bunch of liberal, kind-hearted people, and we were invited to participate in some fashion. We thought ‘Heck yeah.’ It sounded like fun, and we wanted to lend our support.”

Bernard said she’s surprised this was Oxford’s first pride parade since it’s a university community, but she was pleased with the number of participants. Technically, there was one other pride parade held in Oxford in 1992 sponsored by the National Organization for Women that was attended by less than 100 people. Hundreds came out for the LOU Pride Parade Saturday.

“I have been receiving updates from the organizers, and I’m really pleased with all of the groups that are coming out,” she said.

Yazoo native Jonathan Adams, 25, was found decorating a truck with colorful signs that read “God Loves You” on one side and “Be Brave” on the other.

“I’m a painter,” said Adams, a University of Mississippi graduate, who earned a bachelor’s degree in art. “A lot of my work has to do with the struggle of being accepted, and how that relates to me being a Christian, and kind of the problems I’ve dealt with. I try to communicate that. And I would like to stay in Mississippi to see a change in the future, even if it’s really hard.”

Adams said he was excited to be part of Oxford’s first pride parade.

“Everyone leaves Mississippi,” he said. “People who have a survival mentality, it’s best to leave. That’s just the way we operate. But if you want to see change, you have to be brave.”

Part of being brave is being visible, he said.

“Yeah, people will look a little crazy today,” he said. “We normally look like everyone else, but it’s more like a celebration.”