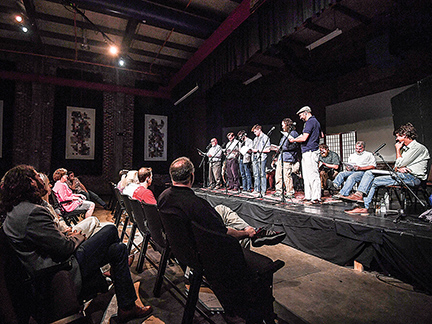 thomas graning Members of the Theatre Oxford perform a dramatic reading of William Shakespeare’s The Temptest at the Powerhouse on Sunday, May 1. Beginning in September, all of the dramatic readings will be held at Shelter on Van Buren.

Creatives who appreciate local theatre, dramatic readings and poetry can now find it by seeking Shelter. A local theatre group has begun to regularly take the stage at the cafe and performance venue Shelter on Van Buren.

“I wanted to have dramatic readings of modern plays, produced in the last 10 years, and I wanted these readings to be open to the public,” he said. “I picked plays that I thought wouldn’t be produced in this area, plays that all had to do with personal connections between people.”

Earnest scheduled one reading per month, usually on the second Sunday. They were first held at the Powerhouse, but moved to Shelter when they opened in January.

“I thought of this idea because my friends and I used to have readings of Shakespeare plays at my house,” he said. “It was always fun to divvy up the parts, have some food and drink, and read these classics to each other.

“Then a friend, Kat Watson, inspired me to read more modern plays, and I thought that other people would enjoy this, too. She even helped me by being one of the readers in three of the plays.”

This year, performers read Detroit by Lisa D’Amour, In the Blood by Suzan-Lori Parks, and The Jacksonian by Beth Henley at the Powerhouse.

Then, they moved over to Shelter, reading Good People by David Lindsay-Abaire, The Lyons by Nicky Silver, Other Hands by Laura Wade, and Race by David Mamet.

They ended the readings with The Tempest in May at the Powerhouse.

“Next season, we’ll schedule all of our readings at Shelter starting in September,” he said. “I haven’t finished deciding which plays to read, but I want to keep with the modern play theme. This time I’m looking at plays that deal with the idea of family.”

Earnest said the public is invited to become involved.

“Whether they would like to read, suggest a play, or just come out and listen, we love to have people come out,” he said.

Anyone interested in the readings or any of the main stage shows can contact Earnest at theatreoxford@gmail.com.

“I hope that the audience learns two things: that Oxford has a wealth of talent, and that we are living in an exciting time for art and playwriting,” he said. “Plus, listening to talented actors reading a play you are unfamiliar with holding a coffee or beer in your hand is a great way to spend a Sunday afternoon.”

Earnest said Shelter has been a wonderful venue for the readings.

“The stage is large enough to accommodate the readers, the space is intimate enough that audience members won’t be shy to ask questions at the end of the play and talk to the readers, and the staff are always helpful with setting up the event,” he said.

If you’d like to know which plays the group will be reading next season and when, visit www.theatreoxford.com or the Facebook page Theatre Oxford – community theater.

All readings are free to the audience.