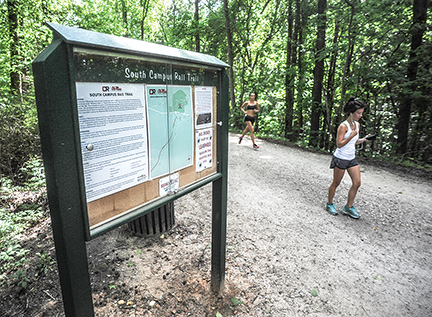 New features will be added to the South Campus Rail Trail in the coming months.

University leaders who maintain the South Campus Rail Trail said those who use the recreation area should remember to follow the trail’s established guidelines that include staying off private property and keeping your dog leashed.

They also plan to add some features to the trail and regular events in coming months.

Shannon Richardson, assistant director of the Department of Campus Recreation at the University of Mississippi, said the South Campus Rail Trail, located just south of Highway 6 and west of Chucky Mullins Drive, has been formerly (and colloquially) known by several different names, including “Whirlpool Trail.”

The land is now named the South Campus Rail Trail to provide a more definitive identity for the main trail, a former railroad line, and to prevent confusion in association with Thacker Mountain, property not owned by the University, and Whirlpool, an appliance plant that once existed near the trails that is no longer in operation.

“We are trying really hard to re-educate the campus and public and get people to use the name South Campus Rail Trail,” Richardson said.

Those who use the trail are asked to follow the policies outlined in an information sheet that can be found in a kiosk on the trail. One policy is that dogs must remain on a leash on the main rail trail.

“Dogs can be off the leash on the bike trails,” Richardson said, “but we do want to protect those who are recreating on the main trail, so dogs have to be leashed.”

Richardson said university leaders also plan to add two waystations for dogs at the main kiosk so people can responsibly pick up after their animals. And they want to increase programming in the area.

“We’re hoping to have a weekly nature hike,” she said. “Other than policies and procedures placed out there, we want folks to understand that if there is a special event they want to host out there, like a 5k or a bike race, you must go through our department to schedule that so we can be aware of what’s going on.”

Richardson said the university only maintains the main rail trail, not the bike trails that are also part of the area.

“The university wanted there to be more oversight of that land out there,” she said, “and Campus Recreation agreed to be the overseer of the land, but that we would only really oversee the main rail trail, and not the bike trails. While a lot of them are still university land, we said it was too out of our control to oversee.”

Richardson said the main trail, from start to finish, is almost three miles.

“If you were to keep going straight, there’s a fence and farmland, and that is private property,” she said.

Those who use the trail are warned to stay off of private property because a number of arrests have been made for trespassing.

Richardson said area bike trails are not part of the South Campus Rail Trail, but others may recreate on them.

“The local bike clubs do a good job of maintaining them,” she said. “It’s very important to look at the map and make sure they are staying on university land. A lot of private property will have posted signs.

“Students have been arrested for trespassing because they are trying to go up to the fire tower on private property, but the university does not own that property, and it’s definitely off limits to everyone.”

Steve Valliant, manager of the Ole Miss Bike Shop, said those recreating should stay away from private property, including the fire tower that is now on land leased by a hunting club.

“There was a gate put up a couple of years ago because there is so much more activity out there,” said Valliant. “Since the hunting club is leasing the land around the tower, they can secure the gate.”

Valliant said he rents about 150 bikes every semester, including many to international students. He gets a lot of calls about mountain bike rentals, but he said the bikes his shop offers are not suited for mountain biking or rigorous use.

However, he is aware that many bikers use the bike trails that are in the area of the South Campus Rail Trail.

“Currently, the trails themselves are maintained by a volunteer group within the Oxford Cycling Club, and all of that maintenance is done in the winter months,” he said.

Valliant said the popularity of the South Campus Rail Trail and bike trails has increased in recent years because Oxford’s population has increased.

Valliant said many of the bike trails are designed to keep bikers within the bounds and off of private property, but it’s important to look at the signs and make sure you are not on “posted” private land.

“We want to make sure everyone stays on the established trails,” he said, adding that the estimated length of the bike trails is 20 miles.