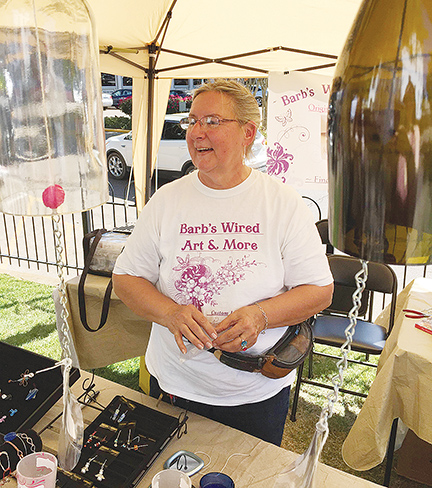 Barbara Stokes greets potential customers at the Maker’s Market in Oxford on Saturday.

Ripley native Barbara Stokes, 65, was found on the Oxford Courthouse lawn Saturday as one of the Oxford Maker’s Market arts and craft sellers.

The Ripley resident said she’s been making crafts and selling them the past few years. She enjoys selling her work in Oxford.

Stokes specializes in wind chimes made from bottles, and she also crafts rings and earrings.

“I like wind chimes, and Pinterest is my inspiration,” she said. “I tried making my own bottle-cutter as seen on YouTube. That did not work. I broke a lot of bottles.”

Instead, she bought a bottle-cutter on eBay called the “G2,” and she’s been making wind chimes and selling them at craft fairs.

“People bring me bottles, and a few of them get emptied at my house now that Ripley is wet,” she laughed. “I just started cutting them and making my own designs up.”

Stokes said wind chimes are popular sellers because of their soothing sounds, and she has a variety.

“They just have a really soft, pretty sound,” she said.

She began crafting four years ago when her mother was ill.

“I was taking care of my mom until she passed away, and I had to live with her to take care of her,” she said. “My daddy was a jeweler in Ripley for 50 something years, so I grew up around jewelry, but he didn’t make jewelry.”

“So I’m naturally inclined to make artistic things,” she said.

She paints on some wind chimes, and those with sports themes have been popular sellers.

“I did a market at Tunica not too long ago,” she said. “I sold Ole Miss, Mississippi State, Alabama, Auburn. I had a dragonfly painted on one, and someone bought that as a Mother’s Day present for their mom.”

Stokes said you never know which wind chime someone will pick.

“There is just no telling,” she said. “I got a good bit of money for a Captain Morgan bottle a few months ago. I usually take off the label, but I left it on. I’ve sold a lot of emerald green ones today and some Ole Miss ones as well.”