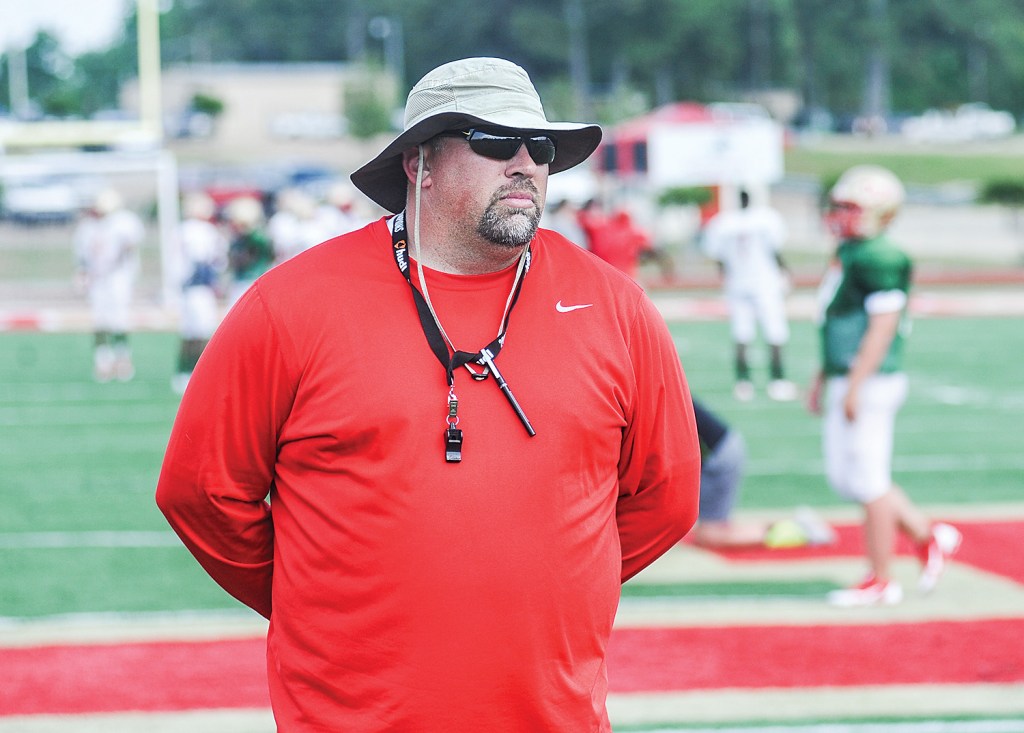 Lafayette coach Michael Fair spent his first spring at the helm getting to know his players and evaluating their skill sets with the Commodores having to replace key contributors this fall. (Bruce Newman)

Michael Fair had a couple of different reasons to keep a close eye on his players this spring.

Lafayette’s first-year football coach is still trying to put names with faces and vice versa after being hired to replace Eric Robertson just weeks before the Commodores started spring drills in late April. But the spring for Fair was just as much about getting his first chance to keenly evaluate his newest group of players in order to start getting an idea of what his depth chart could look like this fall with Lafayette having to replace some key pieces on both sides of the ball.

It made for a competitive three weeks as players tried to make a good first impression.

“I told every one of our guys that no one has a position sewn up right now,” said Fair, who came to Lafayette after two seasons as the head coach at Senatobia. “I really haven’t named starters at any position. There are some getting more reps than others, but I want these guys, every one of them at every position we’ve got, to feel like they’re in a competition.”

The position battles will continue into the summer as Lafayette wrapped up spring drills Thursday with controlled scrimmages against Charleston and Lake Cormorant, and there’s plenty for Fair and his staff to assess. Lafayette lost to graduation two starting offensive linemen, four of its five leading tacklers, its leading receiver in Rashuan Rockette and a 2,000-yard rusher in three-year starter Tyrell Price.

Fair said he likes the potential of the Commodores’ young offensive linemen as well as a quartet of backs led by rising junior Jamarcus Quarles that will likely have to try to replace Price’s production as a group.

“I don’t know if any one person can just step in and do exactly what (Price) did, but we feel like we’ve got a combination of some really good running backs, younger guys that are getting better every day, that we feel confident in,” Fair said.

Quarterback Will Ard is back for his senior season, but he’ll have to hold off Ross Ingram for the job. Both played baseball and missed half the spring, but the Commodores repped heavily with both quarterbacks on the vertical passing game as Lafayette tries to incorporate more offensive balance than in years past.

“We’re working it, and every day we’re getting a little bit more comfortable with it,” Fair said.

The Commodores’ defense is making the switch from the 3-3 stack it ran under Robertson to a traditional 4-3, a transition Fair said has been nearly seamless thanks in part to the guidance of middle linebacker Tay Reed, the Commodores’ second-leading tackler a season ago. Rising senior defensive back Tyler Williams also had a steady spring, Fair said.

“Right now, he’s the leader of that front seven,” Fair said of Reed. “He gets them in the right spots, and he’s taking everybody to the ball. He’s doing a really good job right now.”

Fair has brought with him some familiar faces to fill out his coaching staff.

Carter Norris and Justin Lee will coach the defensive line and defensive backs, respectively, after coaching the same positions for Fair at Senatobia. Lafayette also lost offensive coordinator Dusty Finley, who went with Robertson to Madison Central, and offensive line coach Cody Stubblefield to Tupelo, but Fair will take over both roles.

Fair called plays at Senatobia and will have some help from quarterbacks coach Jay Jones, but he hasn’t coached his own offensive line since his days as an assistant at South Panola in the late 2000s, which has added to the excitement of the new gig for Fair, an offensive lineman during his playing days at Mississippi State.

“I’ve probably had more fun this spring coaching than I have in a long time, and a big part of it is because I’ve been able to go back and coach those guys on the offensive line,” Fair said.

BLOG: Oxford sweeps Grenada, heads back to 5A finals