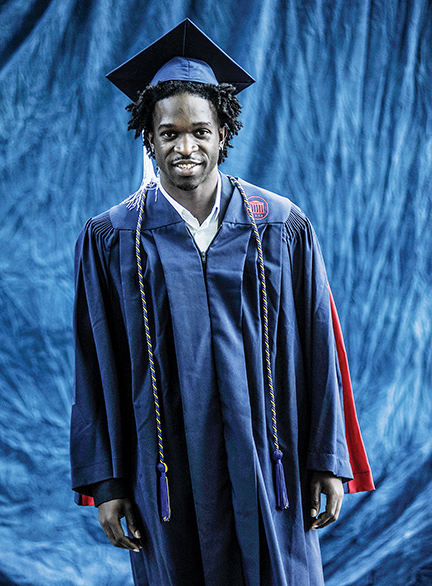 Bruce Newman Kaleb Mitchell wears the new regalia that graduates wore for the first time this year at the University of Mississippi commencement ceremony on Saturday.

During graduation ceremonies this year, University of Mississippi graduates will be wearing newly designed commencement caps and gowns.

The new, custom-designed red and blue caps and gowns bear the Lyceum logo, the first time in school history that the university has had its own custom regalia.

The Jackson-based R. M. Hendrick Graduate Supply House Inc., the company that has been supplying caps and gowns for UM graduation, were asked this year to alter the design.

While waiting in line during the 2014 graduation, university officials discussed how some universities have their own custom gowns, caps and tams for graduation. They felt it was time Ole Miss had its own.

“They’re absolutely beautiful,” Clark said in the news release. “The Lyceum is an iconic symbol. Featured on the robe, it jumps out and brings distinction to the entire regalia.”

Will Clark, 30, a manager at R. M. Hendrick Graduate Supply House Inc., said he and David Hendrick, co-owner of the company, met with university officials, offered samples and talked through designs.

“From that point, we had a solid understanding of the designs that the school wanted,” he said. “We made some prototypes, which we sent to the school for approval, and we went back and forth a few times on the details to be sure that we got all of the details correct.

“It was a tall task, but the University of Mississippi is one of our most important customers, so we were glad to do it, and we feel like the product is top-notch.

“Once other universities see the quality of these outfits, I think we are going to have a lot of requests. This type of project is something that we would only do for a top-tier school because it’s a large investment we’ve made for the future.”

Clark said the fabric of the gowns for doctoral, master’s and bachelor’s students was previously black.

“It’s now navy, and each gown – bachelor’s, master’s, doctor – has a unique customized feature about it,” he said. “The bachelor’s gown is navy, and it has the Lyceum embroidered on it in red. The outside of the sleeves are pleated, and the inside of the pleat is red, so you can see flashes of red from the side.

Similar to the master’s gown, the doctoral gown has twin Lyceum logos embroidered on it.

Clark said the company was grateful for the opportunity to create the new designs.

“This is the only school we’ve ever done this for,” he said. “It was quite a process, but we are very pleased with the result. We hope this will build upon an already outstanding relationship, spanning several decades, with the university. We hope it lets other schools know how capable we are as a company.”

“Dr. Hephner LaBanc and Dr. Clark have done an outstanding job of researching and working with the campus community to design the new regalia,” Wilkin said in a news release. “We look forward to this enhancement to our commencement ceremony. Offering our own distinctive regalia will add to the growing academic traditions of the University of Mississippi.”