Carver has goal of becoming a vet 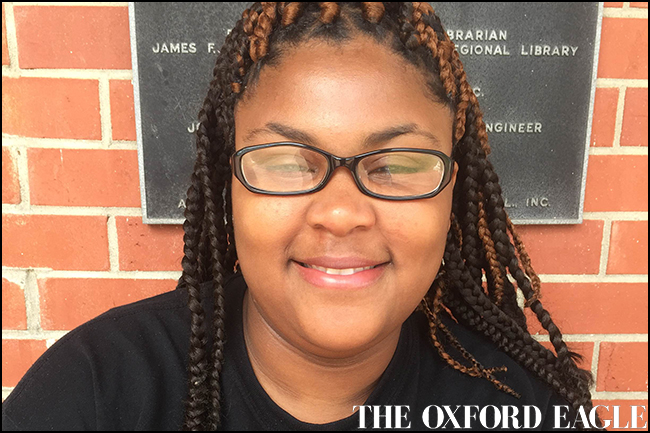 On a warm, sunny Sunday, Patricia Carver, 20, was found sitting on a bench outside the Lafayette County and Oxford Public Library. Carver was in between DART shifts at Newk’s, a nearby restaurant.

The native of Humphrey’s County grew up in the Delta.

“We just played,” she said, recalling some of her earliest memories. “We’d go to the park. When I was little, I got my first bike. I learned how to ride my bike up and down the street. Me and my mom played at the park.”

“That’s where my highest grades were,” she said.

“Right now, I’m in general studies getting all of my classes in, and then I’m going to go to Mississippi State,” she said.

She plans to become a veterinarian.

“Ever since I was a little girl, I had pets around me,” she said. “I had ducks, cats, dogs, turtles. That made me love animals, and I still do. I can’t go a day without them. Every time I see a dog, I’m like, ‘Can I pet your dog?’ It just comes naturally.”

Carver said she has two dogs at home — her roommate’s dog, and her sister’s dog. They are named Bella and Ella.

She said she would first like to work at an animal clinic.