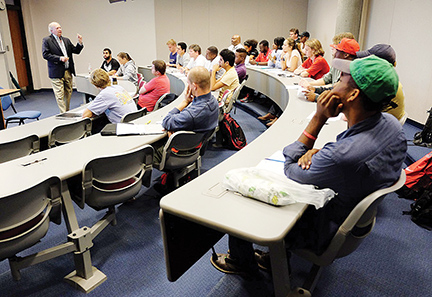 What makes a successful business idea? Employees at the University of Mississippi’s Center for Innovation and Entrepreneurship have a lot of answers for that question, but they say it all comes down to solving customer problems.

“You don’t have a successful business idea if you don’t have three people who would pay you for it right now,” said Rich Gentry, one of the CIE directors.

“The word sounds fantastically grandiose, but figuring out how to move people through your line faster would be an innovation,” said Gentry, 38, a UM associate professor of management and entrepreneurship. “The challenges for a lot of businesses — the challenges for a lot of managers as well — is that they stop asking questions about how to make things better, and they focus on executing what they already do.”

Gentry said it’s important to continue asking questions about how to improve your business, and that’s something they teach UM business students.

The CIE is led by Gentry and three others that include Clay Dibrell, 47, the CIE’s executive director; Owens Alexander, 66, an adjunct instructor of management who serves as the entrepreneur in residence at the CIE; and Cobie Watkins, 27, who is also the director of student and alumni programs.

“This included our student programs, such as the Gillespie Business Plan Competition, which is our signature event that occurs every spring,” he said. “It’s been going on for about 10 years.”

The Gillespie Business Plan Competition offers a $10,000 first prize and the opportunity to spend a year in Insight Park, the university’s incubator for entrepreneurship. Second place is $5,000 and third place is $2,500.

Prizes are awarded to students in the form of scholarships and to help promote their businesses. They also give an award for best business plan that deals with a Mississippi issue, such as improving the economy, job creation or education.

Alexander, a Savannah, Georgia, native and UM graduate, said the competition had 44 entries this year. They are narrowed down to 16 semifinalists who present in front of two panels of live judges. Six finalists are selected, and another set of judges evaluates them.

“The business has been relatively successful,” Alexander said. “She’s a great ambassador as a previous Gillespie winner. The most recent winner, four weeks ago, is a company called Nimble. That’s a new start-up company in the sharing space, where at the moment, college women can rent dresses from each other.

“It was their second time to enter Gillespie. They were a finalist last year . . .We can’t prematurely announce where they’re going, but they have some interest from people in the start-up venture capitalist world. We look and see great things from them.”

Since the inception, the CIE has worked to add more student programs.

“We just had the business model competition come online in the fall, so we now have a signature fall event and a signature spring event,” Alexander said.

Leaders have also been able to secure grants that fund student business consultant positions, and the CIE works cooperatively with state organizations, such as the Mississippi Development Authority.

The CIE also hosts a competition called Landshark Tank that is similar to the reality television competition “Shark Tank.”

Yazoo City native Cobie Watkins, 27, has been with the center the past nine months and has lived in Oxford for almost two years. The Mississippi State University graduate is also the director of student and alumni programs.

“Students all across campus, not just business students, can come and participate in a 10 minute elevator (business) pitch competition,” she said. “They can pitch anything they want. They can use props, but they can’t use presentations.”

First prize winners receive $300. The competition is open to all students in all fields.

The CIE also hosts an Innovation Boot Camp. Gentry said it’s designed to help students who have a small business idea they want to grow, or for those curious about what the CIE does.

“We do some brainstorming to see what their idea might be,” he said. “They pitch it. It helps people begin to think about their idea.

“A lot of people have ideas in the back of their mind, but they don’t really want to talk about them until they have a fully formed cogent plan. But you’re never going to have a cogent plan unless you talk to customers.”

The CIE also hosts a business model competition created in the fall, and because of a grant, they have been able to establish a team of student business consultants comprised of 18 of the brightest UM business and accounting students.

“We worked about 1,600 hours of consulting time,” Alexander said. This included projects for the University of Mississippi Medical Center, the Oxford business Holli’s Sweet Tooth and a food truck marketing campaign.

“It was 16 different clients the students worked with this year,” said Alexander. “The work is free to the clients.”

Alexander said they are always looking for additional clients, and an application is available on the center’s website.

“We always want to have a funnel for future jobs,” Alexander said. “We don’t run the program in the summer, so we will be kind of refilling the funnel to start again with partially a new team around Sept. 1.”

Franklin, Tennessee, native Dibrell, a professor of management who has been with UM for seven years, said it’s always the right time for a good business idea. “It seems like if you have a good idea, no matter when you start, good things will happen,” he said.

Gentry said the business world has changed in the last 50 years.

“Innovation, we’d argue, is a necessary component for any kind of growth,” he said. “Without innovation, you become stagnant, and you die.”

For more information, look for the CIE’s Facebook page. 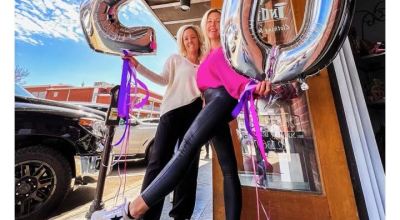