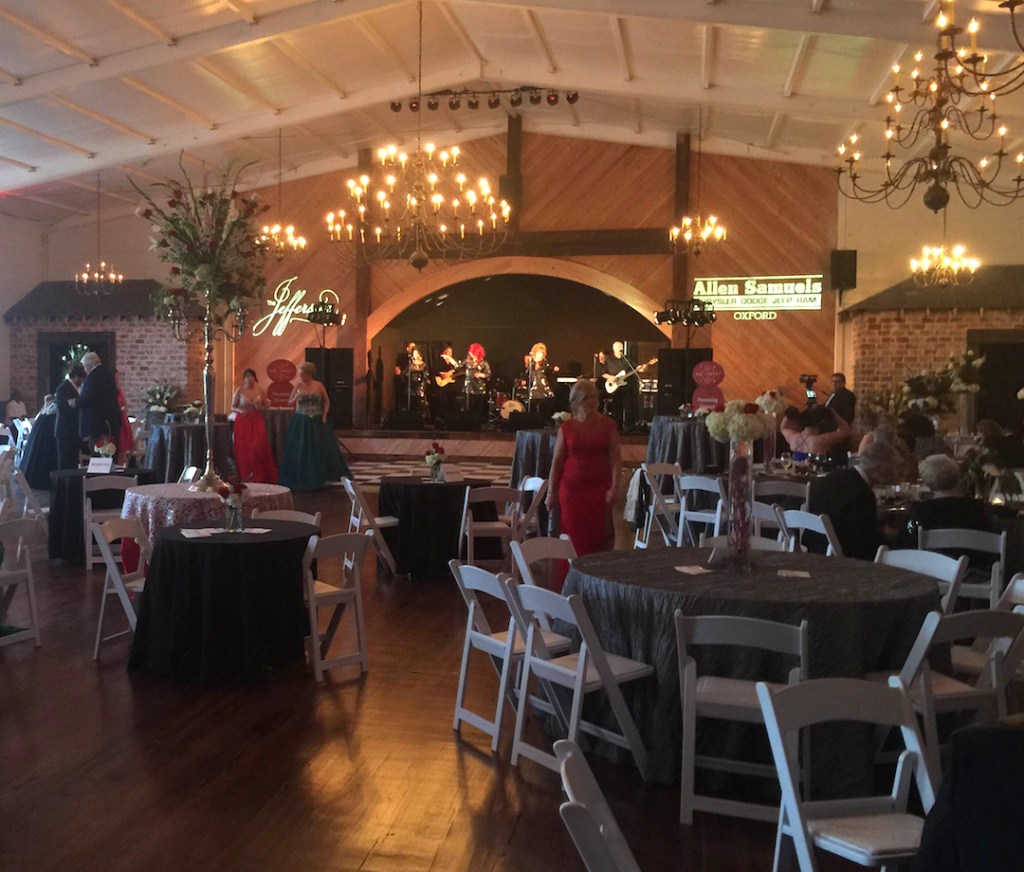 Cars drove down a winding rural road that wrapped around a weathered barn and a large pond to The Jefferson, one of Oxford’s newest event venues Thursday night.

It was the setting of the Oxford-Lafayette County Chamber of Commerce’s second annual Red Carpet Gala.

Guests entered the building walking over a red carpet and joined others at the black-tie event wearing gowns with sparkling sequins and jewels. Some danced to music by The Bouffants in one room, while others sampled food from a signature event called the Chamber Chef Shuffle.

Eupora native Holli Ratcliffe has lived in Oxford the past 20 years and served as a Chamber of Commerce board member the last six years.

“I’m very supportive of our chamber,” she said, “and this is such a fun event. They did their first red carpet event last year. It’s a neat chance to get dressed up and have fun, and a bit more relaxed than your typical business environment.”

Ratcliffe said this is the first event The Jefferson has hosted.

“I don’t even think they are completely finished, but they went ahead and squeezed us in on the calendar,” she said.

Pam Swain, vice president of the Chamber of Commerce, said the gala was created last year as part of the chamber’s 75th anniversary celebration activities.

They decided to make it an annual event.

“The Jefferson joined the chamber, and we were able to talk with them and say we’d love having the opportunity to have the event at a premiere location,” she said. “It adds a little intrigue and another dynamic to it. We have been working very closely with them.”

“Our Red Carpet Gala follows it up the next day,” she said. “It’s just a celebration of Oxford and Lafayette County.”

“Some of them are even cooking it right in there tonight,” she said. “The chefs are actually right behind the table. And then on the other side of the building, we have The Bouffants, and everyone’s dancing.”

Around 400 people attended the event.

“We’re just really celebrating the community that we live in, the success of our Chamber of Commerce and how lucky we are to live here,” Swain said.

Kate Rosson, gala chair, said people loved the event so much last year, they had to bring it back.

“Our chamber membership spoke up,” she said. “They said it was phenomenal.”

Rosson said they were surprised by the turnout last year of a little more than 300.

“This year, we have right at 400,” she said. “I’m astounded with the growth of it. I think every year, we’ll get a little bit bigger.”