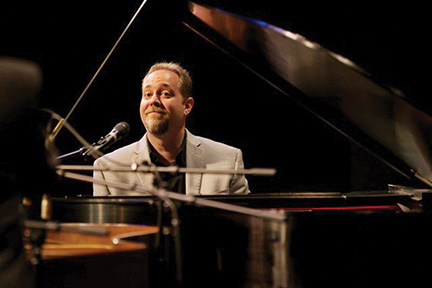 For the first time in Oxford history, the World Championship Old-Time Piano Playing Contest & Festival will be held here.

The event will be held today through Monday inside the Nutt Auditorium in the University of Mississippi Music Building.

Ian Hominick, who is originally from Nova Scotia, is an associate professor of music at the University of Mississippi. As one of the event organizers, he is a member of the piano faculty and has played since he was 7.

Hominick said the World Championship Old-Time Piano Playing Contest & Festival has been held in Illinois for 41 years, but Oxford was chosen as the spot for the 42nd competition.

“Guest artists and competitors will be performing in the piano styles prominent in the early 20th century — ragtime, blues, traditional jazz, honky-tonk and boogie-woogie,” he said. “Contestants are judged by three professionals who grade them on their technique, interpretation and showmanship.”

Hominick said contestants must be in period costume and are emceed by host and founder Ted Lemen before each round.

The winner from the Junior Division (17 and under) is decided on Saturday. The field for the Regular Division is narrowed to 10, who advance to the semifinals and finals on Sunday afternoon.

“Anyone who makes it to the finals must include a tune that is relevant to Mississippi or one of our adjoining states or cities,” Hominick said. “There is over $5,000 in prize money.”

Performers from all across the U.S. will be in Oxford for the competition.

“Our youngest contestants are 11-year-old twin sisters from New Jersey, and our oldest is a retired biochemistry professor from Michigan State University,” Hominick said.

There are also smaller contests surrounding the main events. On Friday, there is a New Rag Contest during which performers play their own original ragtime pieces. A Duet Contest will be held Friday. Performers compete in pairs, two to a piano.

On Sunday morning, a “Cutting Contest” will be held. This is the only contest completely decided by the audience. Performers play off in pairs, trying to outdo each other at the keyboard, until only one is left, thus “cutting” the competition.

Hominick said 300-400 people usually attend the event. Anyone who can play piano is eligible. They cap the field at 26 contestants.

“There is all kinds of literature one can hear including “Mississippi Mud,” “The Ole Miss Rag,” Scott Joplin’s “The Entertainer” and “Maple Leaf Rag,” Zez Confrey’s “Dizzy Fingers” and lots of music by Eubie Blake, Fats Waller, etc.,” he said.