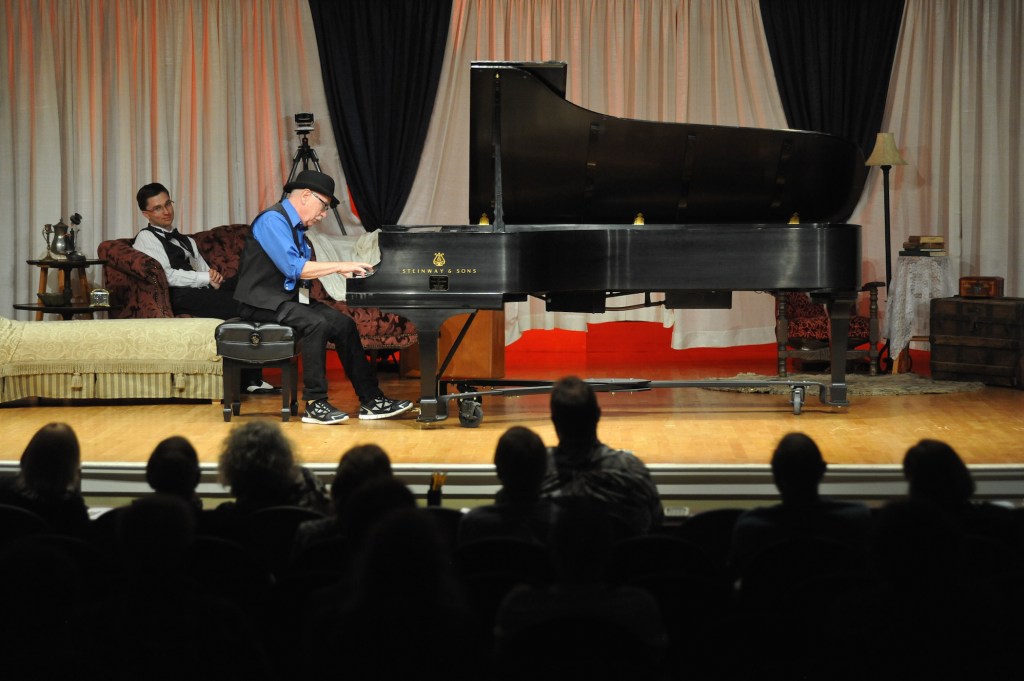 Tom Lemen plays during the World Championship Old-Time Piano Playing Contest and Festival at Nutt Auditorium in Oxford, Miss. on Friday, May 27, 2016.

Captain Alexander, 10, named after one of his father’s great-grandfathers, a captain who fought in the Civil War, is also carrying on another family tradition. He has been taking piano lessons the last four years under the instruction of piano teacher Joe Garrison of First Presbyterian Church.

The Oxford University School student’s mother, Kristina Carlson, took piano as a child, and she thought learning to play an instrument would be beneficial to her son in a number of ways.

“There are studies that show it is wonderful for a child to study music and to learn a musical instrument,” Carlson said. “They say it helps in other subjects, like math and science, and even foreign languages. There are a lot of great benefits.”

Oxford offers a number of different ways to learn piano or practice your piano playing skills, and Virginia native Carlson, who has lived in Oxford the past eight years, said things are a little different now than they were when she was a piano student.

“I think when I was younger, it was more of a form of punishment than anything else,” she laughed. “The way they taught it when I was a kid, it was more about sitting up straight, where your hands are supposed to be, and all those kinds of things. It’s so much more creative now than how I was taught, which was just to practice chords over and over.”

“We didn’t even buy a piano,” she said. “We got him a keyboard. It used to be, you had to buy a piano to take lessons, and that’s not the case anymore. You can find ways to practice without having to have such a big investment.”

“I think more people are looking for out-of-school activities, like piano, the arts and drama,” she said.

Springfield, Missouri, native Chelsea Riches, 25, is the owner of Riches Music Studio. She is a flute and piano teacher who has been playing piano for 22 years, and she has taught Oxford piano students.

She began taking lessons at age 4.

“My mother is a piano teacher, and all of her children were required to take lessons,” she said. “The motto in our house was ‘You don’t eat until you practice.’ I am the middle of seven children, and we are all classically trained pianists.”

Riches said her studio is a little different than the average piano teacher’s studio.

“We still use a method and have theory exercises, but one thing that sets my studio apart from others is the use of the iPad and off-the-bench activities,” she said. “My students work very hard on their songs and homework, but we have a lot of fun in lessons.

“We play music games that reinforce certain concepts that we are studying, and sometimes have group lessons with other students to encourage collaboration.”

Riches also holds recitals for students throughout the year, including Halloween costume recitals, Christmas recitals, spring recitals and summer recitals. The youngest age she teaches is 5, but she has taught adults of all ages.

“A lot of parents want their kids to take piano lessons and have them enrolled in the early elementary years,” she said. “However, life gets busy, and many students drop out due to lack of interest or a different activity takes priority.”

Turnover is usually high from year to year in the average music studio, she said.

“The retention rate in my studio for the 2015-2016 school year between fall semester and spring semester was 100 percent, and my studio tripled in size,” she said.

Riches said she doesn’t think the popularity of learning piano has increased or decreased, but students are interested in a different genre of music.

“Most kids these days don’t want to play classical music,” she said. “They are more interested in learning songs that they recognize and to which they are able to sing along.

“Music has evolved a lot over time, and I feel that this change isn’t any different than the innovations between the Baroque and Classical eras or the Romantic and Contemporary eras.”

Riches said there are many benefits to playing piano.

“Not only is a student learning how to play the piano, but they are learning about discipline, patience, creativity, confidence, self-esteem, and many other aspects of life,” she said. “Many studies have shown the benefits of playing music help the overall development and health of a person.”

Last weekend, a 42-year-old piano competition was held in Oxford for the first time. The World Championship Old-Time Piano Playing Contest & Festival welcomed more than 300 people to the campus of the University of Mississippi’s Nutt Auditorium inside the music building.

Ian Hominick, an associate professor of music at the University of Mississippi, helped organize the event that featured guest artists and competitors performing in piano styles prominent in the early 20th century, such as ragtime, blues, traditional jazz, honky-tonk and boogie-woogie.

“This event has kept a following since its inception in 1975 after the Robert Redford movie ‘The Sting’ made its debut,” Hominick said. “The folks that are there every year feel it is important to preserve the repertoire and the performance practice from this golden age of music. This is a fun event for all ages with lots of performer/audience interaction.”

If you’re a young person interested in learning more about piano, Hominick is also the director of the Piano Discoveries Camp that will be held June 12-18 at the University of Mississippi. It offers students the opportunity to study piano and make new friends.

The camp is designed to both encourage and challenge piano students from seventh through 12th grades in a variety of musical activities. There also will be recreational adventures.

The cost of attending Piano Discoveries is $500 for resident campers. This includes room, board, tuition, all recreational activities, concerts and a camp T-shirt. The cost for commuters is $450, which includes everything except housing and meals (lunches will be provided).

A non-refundable $75 registration fee (applied toward tuition) is required at the time of application. For more information, visit the camp website athttp://www.outreach.olemiss.edu/youth/piano/.