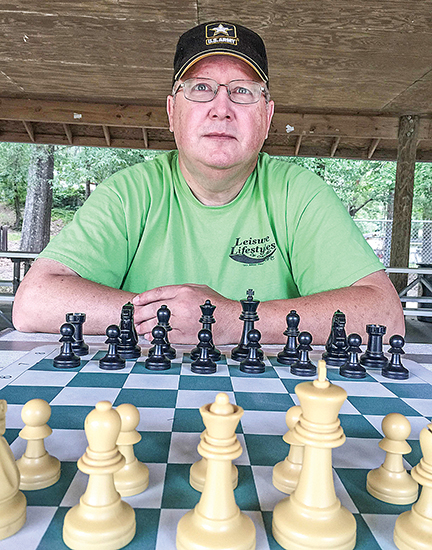 On Sundays at Avent Park, you can often find Alan Blackburn playing chess.

Blackburn, who grew up in northern Iowa, spent 20 years in the U.S. Army after graduating high school. Then he moved to northern Minnesota.

“The last job I had over there, I worked in a factory that made french fry products,” he said. “This winter, I just decided I was going to goof off, and I came South and just happened to stop off in Oxford.”

Blackburn said he decided to travel South by looking at a weather map. Memphis seemed like a good spot.

“Memphis was right on the edge of a cold front,” he said.

He traveled to Memphis, but he didn’t like the traffic.

That led him to drive to Pontotoc.

“I went to Pontotoc for about two weeks, but there really wasn’t anything over there,” he said. “So I decided to check out Oxford.”

Blackburn said he discovered the Oxford Activity Center and began playing dominoes and other games there. Then he decided to start a chess program.

“I got too many young kids who knew nothing about chess, and trying to teach them in one hour just didn’t really work out,” he said.

Instead, he now comes to Avent Park and plays chess with whomever shows up and wants to learn on Sundays from 3 p.m. to 5 p.m.

He won’t stay in Oxford because it’s “too hot.”

Blackburn is usually at the park every afternoon except Wednesdays. If you’re interested in learning how to play chess, give him a call at 218-839-3289.