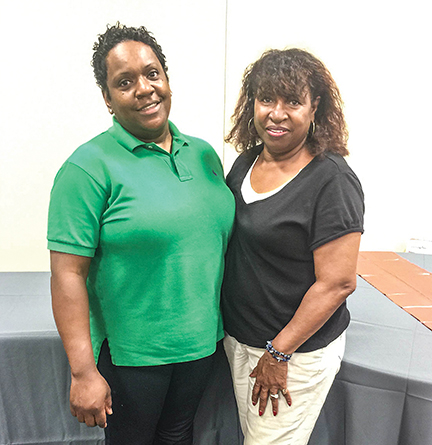 LaReeca Rucker Bridgette Woods, left, is helped by her sister, Faristene Webb, at Sunday’s Best. The food truck is one of several operating in the Oxford area.

Woods, who once worked as the deputy clerk for the Lafayette County Tax Collector’s Office, and her husband, Michael Woods, who works for Pepsi as a sales account manager in the Oxford area, decided to go into the mobile food business after pondering the idea for years.

“I’ve always catered for nine or 10 years on the side, along with my other job,” Bridgette Woods said. “When we would go on vacation, we would see different food trailers. We would always say we wanted one.”

Last year, they finally decided to make it happen. Woods said there are about five food trucks now in the Oxford area. Some are based out of other towns, but they come to Oxford to sell food.

Sunday’s Best Express features a variety of food on the menu.

“We have an open menu ranging from catfish to hot wings,” she said. “We are really known for our Philly cheese and our hamburgers.”

The business also caters. On Mondays and Tuesdays, they set up lunch at the Winchester factory in Oxford. They also sell food at festivals in other towns.

“We stay pretty busy,” she said. “Our goal is to eventually get a building. I also do soul food cooking, and that’s what people want.”

“You get to see different ranges of people, and they get excited when the see the truck,” she said.