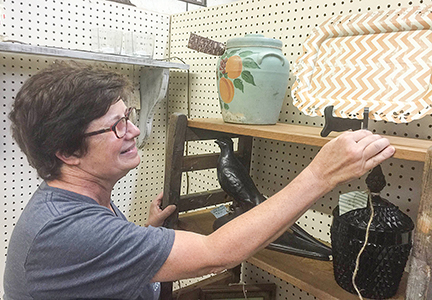 “My father worked for the university,” she said. “He was dean of admis

sions, so I was at the university quite a bit going to the swimming pool there.”

Duchaine has been a dental hygienist for the past 32 years in Oxford. She and her husband, who worked for the Oxford Fire Department, spend their spare time going to flea markets.

They also enjoy buying and refurbishing items to sell at the Cotton Boll Antique Mall at 1501 Molly Barr Road in Oxford. That’s where she was found Sunday afternoon.

“This is a part-time hobby,” she said. “We love to go to flea markets, buy old things and fix old things up, or find a creative way to use something old.

“Problem is, your house gets full. And then you decide to turn it into a hobby. And because you still like to go to those places, you just don’t need anything. So you bring it here and let someone else enjoy it. That’s what we enjoy doing.”

Duchaine has several pieces in her booth at the antique mall, including an old shoe drying rack that has been transformed into a shelf, and the side of a school desk that is now a piece of wall art.

“They like more outdoor, porchy things right now,” she said. “Come August, the students will come into town. They like little things, like tables and mirrors and things to hang jewelry on. “During football season, we’ll see everyone wanting something red and blue. It doesn’t matter what it is. So the seasons do make a difference in what sells and what doesn’t sell.

“A lot of people look for unusual wall art — taking something old and making it into something you don’t normally see on the wall.”