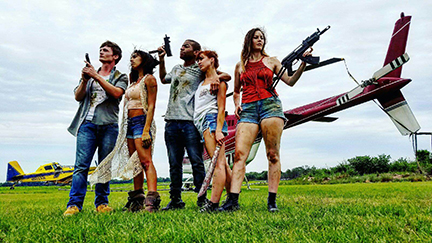 Filming for the movie “Kudzu Zombies” is taking place in Charleston with several local actors and support staff from Oxford participating in the project. The movie is expected to be released sometime in 2017.

Oxford is filled with zombies hiding in the kudzu. If you’re one of them, you can now come out of hiding and become an extra for a film featuring Oxford actors that is currently being shot in Mississippi.

Oxford actors Johnny and Susan McPhail and Andy Douglas star in “Kudzu Zombies.” Oxford actor Max McDonaldson, whose day job is the technical director at the Gertrude Ford Center on the University of Mississippi campus, also had a role in the film.

Montana Byrd, a UM student, is helping run the production office, and many Oxford people have been extras, including Morgan Pennington from the band “And the Echo.”

Timothy Haug, the lead actor in “Kudzu Zombies,” had to cancel his interview at the Graduate Hotel last week because of the production schedule, but spoke by phone.

Haug was raised in Cloverdale, California, a small town in wine country with a population of around 8,000, but he has lived in Nebraska, Brazil, and Los Angeles the past couple of years when he isn’t filming “Kudzu Zombies.”

His path into acting involved a little serendipity.

“I was on a football scholarship at a small college in Nebraska,” he said. “One day, I was just walking by a theater, and a I saw an audition. I decided to try out for it because acting was always something I wanted to do. You know how there’s something you want to do, and everything is distracting you?”

Haug landed the lead role in a production of “Who’s Afraid of Virginia Woolf?”

“I guess I got the acting bug, and it just stayed with me,” he said.

One of the recent films he appeared in, “To Feel Human,” was screened at the Cannes and Nice film festivals in France. Another film, “Sins of the Father,” recently won an award at a Puerto Rico film festival.

“This movie is going to be great,” Haug said, referring to “Kudzu Zombies.” He plays Lonnie.

“Lonnie and another character named Kayla had a past thing,” he said. “They were kind of like high school sweethearts. For some reason, she went to college, and he ended up staying in town. When this movie takes place, it’s when Kayla visits the town, and she has her new boyfriend from college.”

Haug describes Lonnie as a good guy who tried to make the best of everything.

“That’s one of the things that attracted me to this character,” he said. “He’s kind of the good guy who ends up getting into a hero role.”

“I think they’ll be surprised what happens in the end,” he said.

He said the infectious kudzu plant found widely in Mississippi is a fitting element for the zombie movie.

“Once you learn about it, it’s kind of a plant that is probably never going to go away,” he said. “I think it kind of fits.”

Melanie Addington, director of the Oxford Film Festival, is handing publicity for the film. She said it was written by Christian Hokenson from Los Angeles. It is being shot in Charleston.

Addington said producer Daniel Wood was part of the film “Texas Heart” that also filmed in Charleston. She said he received such a warm welcome from locals and fellow producer, Laura Warner, who lives there, he returned with this feature.

Addington said the film will probably be released sometime next year.

If you’re an Oxford resident who is interested in becoming a zombie in the film, contact Warner at 662-417-5515.