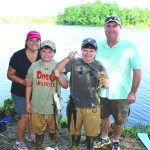 Twins Kyle and Noah Daniels from Oxford show off the fish they caught at the Lafayette County Law Enforcement Association annual Youth Fishing Rodeo. Proud parents Tina and Richard Daniels are with them. Photo ©Joey Brent 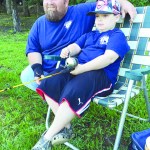 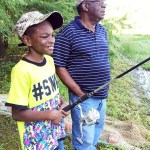 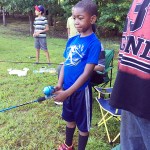 Oxford resident Michael Key, brought his son, Michael Key Jr., 6, to the fishing rodeo. He said he began fishing around the same age as his son.

Wearing a T-shirt that read “King of the Swamp,” R.J. Miller, 11, proudly held up the four-pound catfish he quickly caught at the beginning of the Lafayette County Law Enforcement Officers Association Youth Fishing Rodeo.

The annual event has been canceled the past couple of years because of rain, but it was held Saturday at Puskus Lake.

R.J., a Lafayette Middle School student, was one of the participants who made the rodeo a Father’s Day event by attending it with his dad. He said he started fishing at age 5.

“Actually, what is unique — my first fish came from here, from that pier right over there,” R.J. said. “I’m used to fishing, because I brought home first place before, and the funny part was, when I brought in first place, I had to jump in the water for the fish.

“I was fishing at Pat Lamar, and I caught a big four-pounder, and that sucker got off the hook. I had to jump in the water for it.”

R.J. said he caught 25 fish in less than two hours at a fishing rodeo last year.

“If you’re fishing in a river, most of the time, you want to put your weight above the hook,” he said offering fishing tips while standing near his tackle box containing many lures.

Batesville native Michael Key, who has lived in Oxford the past 13 years, brought his son, Michael Key Jr., 6.

“I saw it on Facebook, and every one I see, I try to take him to them to get him into fishing and the outdoors,” said Miller, who was introduced to the outdoors by his father when he was his son’s age.

“My dad started taking me hunting and fishing,” he said. “It runs in our family. We start off young. He bought me my first gun when I was 5. The first time I went out, I killed two rabbits, and from that point on, I was hooked.”

Bruce Jenkins, a retired game and fish warden, came up with the idea for the fishing rodeo and got the Lafayette County Law Enforcement Officers Association involved. He was there Saturday helping with registration.

“We started this 20-something years ago,” he said. “We wanted to introduce the kids to the outdoors and fishing. We usually have around 80 or 90. We have about 60 right now.”

Candy Williams, secretary/treasurer for the association, said the event is free, and everything is furnished except the fishing pole. Participants are treated to hotdogs, chips and drinks, and every child receives a prize.

Batesville native Donnell Williams, 67, brought his grandsons to the fishing rodeo. The Oxford resident since 1975 worked at North Mississippi Regional Center for 34 years and retired in 2005.

“Now, I’m just doing whatever I want to do,” said Williams, pulling a worm out of a Styrofoam box. Bait also was provided at the fishing rodeo. “We’ve been trying to fish at different places in ponds around the county. We didn’t catch anything but turtles, but it was just fun going out there.”

His grandsons, Jeremiah Carter, 10, and Nathaniel Carter, 12, stood beside him casting fishing poles.

“We try to attend the rodeo yearly,” Jeffery Houston said. “We love fishing. So we try to go every chance we get. I was born doing it.”