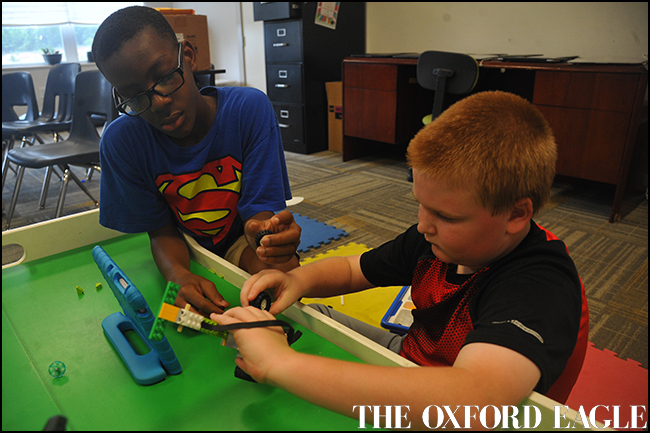 Seven students interested in science and technology are getting more than a fun five days at camp this month.

“Who knew kids would be so excited about building something?” said Blaire Barlow, an OUS preschool teacher who facilitates the camp.

Barlow said EagleBots gives campers “the best of both worlds.”

“We’re making them follow a process to get to an end result,” Barlow said. “And (the campers) have fun in the process.”

EagleBots uses iPads and an app that provides students with step-by-step instructions for building a variety of robots. Students then program the robots using a Bluetooth device, making them interactive.

Blake Covington, an OUS rising fifth-grader, learned about the physics of weight and balance while building a rover, or a robotic vehicle.

“You have to balance weight on your vehicles,” Blake said. “My rover was tilting up, so I knew I had too much weight on the back. I had to add some to the front.”

“I would have never imagined what I could build (without attending camp),” she said. “My favorite is the rover because some people use them on Mars to see what’s on it.”

Barlow helped facilitate similar camps in her hometown of Texarkana, Texas. After OUS learned she had experience with the camp, school leaders asked her to facilitate the school’s first one.

“I like the ‘ah-hah’ moment,” Barlow said. “The cool thing is they’re doing it on their own.”

OUS will host a second session of the EagleBots camp July 25-29.

Although additional campers will be admitted at this time, space is limited. Call OUS at 662-234-2200 for more information.