The Gulf Coast beaches are packed this Fourth of July 2016 weekend and many are concerned about potential fecal bacteria levels in the sea water after an outbreak this week at many locations.

Here is the good news, though, in the latest Florida, Mississippi, and Alabama beach bacteria warnings update: Most popular areas including Destin, Panama City, Seaside and Gulf Shores have the all-clear. No high levels of bacteria are being detected there. 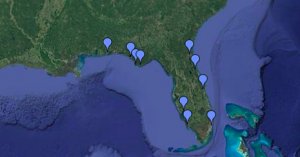 The means popular areas including Gulf Shores, Destin, Panama City and Seaside along 30A should be good for swimming this Fourth of July. Just make sure to check flags flying at the beaches for any other warnings like surf or pests.

In Walton County, near Destin, two beaches had warnings earlier in the week but have now been canceled. Those included Blue Mountain Beach and County Park (Miramar) Beach.

The Florida health department says the concern is over Enterococci, “bacteria that normally inhabit the intestinal tract of humans and animals. The presence of enteric bacteria can be an indication of fecal pollution, which may come from stormwater runoff, pets and wildlife, and human sewage. If they are present in high concentrations in recreational waters and are ingested while swimming or enter the skin through a cut or sore, they may cause human disease, infections or rashes.”

You can check out latest updates from Alabama beaches and Mississippi beaches here: