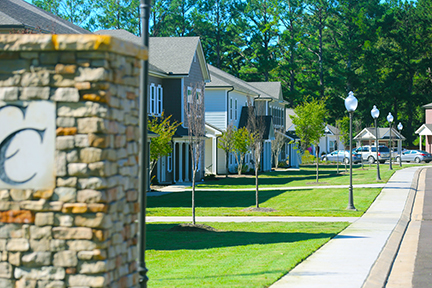 An Oxford businessman wants to bring new housing to the city that he believes would help fill a gap for the town’s workforce community.

New Albany native Stewart Rutledge, 36, grew up in Rankin County, but he has lived in Oxford since 1998. He attended law school, but decided to become a developer instead.

“Housing in general is a difficult thing anywhere,” he said, “but in a place like Oxford, which has such a unique form of demand, it is as difficult anywhere in the nation,” he said. “It’s more comparable to places like Asheville, North Carolina; Aspen, Colorado; and higher density urban areas, in that land is scarce.”

Rutledge said the majority of housing sectors are well addressed, and that’s something to take pride in, but a housing gap exists.

“When you have sufficiently served your second home community and your students, but your single moms, your firemen and your workforce are not served, that’s when it becomes more controversial,” he said. “We’re talking about addressing that gap that is not the bottom end. This is the cutting edge technology for filling housing needs.”

Rutledge said when many people think of affordable housing, they think Section 8 or PIH, the Office of Public and Indian Housing, a Housing and Urban Development program. The Section 42 program shares some characteristics, but is different, and it’s designed to serve the middle ground economically. He said the burden, risk and quality of the development fall on the private developer, not the government.

“If you qualify on Day 1, and you get a job the next day making a million dollars, you get to keep your house,” he said. “We want people to move up. We want that single mom to get a better job, but to keep that high quality house.”

Rutledge said the only involvement the government has with Section 42 housing is providing tax credits for construction.

“They basically just provide a discount in federal taxes in return for us promising to rent at moderately restricted rents and for people who, on Day 1, qualify at or below a certain income level, but on Day 2, any income level,” Rutledge said.

The proposed development would also act as a rent-to-own program. At the end of 15 years, every dollar residents have paid in rent becomes a down payment on the purchase of their home.

Rutledge said the federal program is administered nationally at the state level. Mississippi’s office for the program is Jackson’s Mississippi Home Corporation.

He has created Section 42 housing developments in Mississippi, Tennesee, Florida and Texas. The most recent development was in Holly Springs, where 92 units were constructed.

Land is the challenge

Rutledge said challenges for building the development in Oxford and the county are land prices and infrastructure.

“If you’re going to put 50 units on seven acres, you have to have sewer,” Rutledge said. “Oxford’s sewer system is sufficient and large, but it doesn’t extend into the county very much. You have to be connected to a major sewer vein.”

So far, Rutledge said he’s failed to locate any land within the city limits to build a 50 to 100 unit development. The developments average about 50 units that are 1,500 square feet each.

The idea of a housing gap is not new. Rutledge said Oxford is facing in 2016 what many communities faced years ago. His development would target families who want to live closer to their jobs in Oxford.

“There are a lot of jobs around here, but those people in those jobs have to live way out in the county or in Water Valley,” he said. “Another segment that this affects sometimes is the entire university — faculty and staff. Your professors and your faculty – they’re incomes are going to be a little higher than the group to which I am referring — but staff (members) are definitely going to fall in that gap.”

Rutledge said they’ve also looked in the county, but a sewer connection is needed. He is also exploring land near the city’s industrial park where some sewer lines are located.