THE DART: Edwards never gave up on becoming an artist 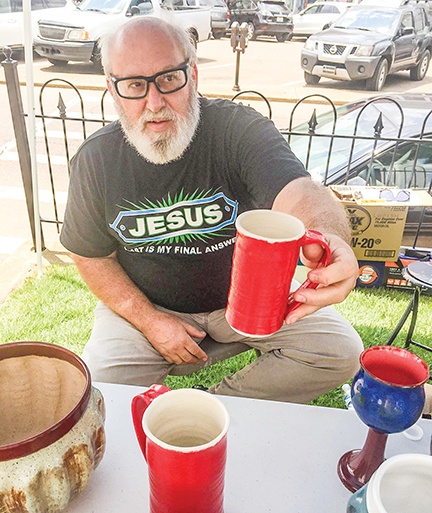 LaReeca Rucker Artist John Miles Edwards was found with his pottery Saturday at the Maker’s Market.

Ole Miss graduate John Miles Edwards, 57, lives in Crystal Springs, but his earliest memories are about Germany where his father was stationed with the Air Force.

He remembers crawling inside a Volkswagen Beetle at age 3.

“I had no business getting in it,” he said while seated under a tent at the recent Oxford Maker’s Market on the Courthouse lawn. Edwards came to the event to sell his pottery. “When I shut the door, somehow I locked it behind myself, and I didn’t realize it. As a 3-year-old child, I couldn’t figure out how to open the door, so I got kind of panicky because it was getting hot in there.

“Fortunately, it happened a few minutes before people started getting off work and coming home, and somebody pulled up beside me and saw this kid banging on the window, ‘Let me out. Let me out,’ and they let me out of the car. I didn’t say a word. I just headed inside embarrassed.”

Edwards was also embarrassed the time he got in a fight with a 5-year-old girl on the playground.

“I broke a piece of the sandbox off the edge of the rail and clobbered her in the head with it,” he said. “She bled profusely, and my father came and scooped her up off the ground, took her and washed her head, and took her to get a stitch in her scalp, because I hit her with a nail. I had been watching ‘Perry Mason,’ and I thought they were going to give me the electric chair for murdering her.”

The Edwards family moved around, but his father left the Air Force after he was stationed at Keesler Air Force Base in 1970. Then they became residents of Mississippi and eventually moved to Port Gibson when Edwards was 12.

“That’s the first place I could call a hometown,” he said.

Edwards said he was a minority in Port Gibson, and learned about reverse discrimination. He attended junior high and high school there, but eventually became a student at the University of Mississippi graduating with a bachelor’s degree in art.

“I lived here a long time after I graduated,” he said, referring to Oxford. “I took a long time to graduate, changing majors and stuff.”

Edwards has had a number of other jobs throughout the years, but he never forgot about pottery, a skill he learned in college art classes.

“I left college and began to do whatever I had to do to pay the rent, having children and everything,” he said, but he always wanted to become an artist. “I was doing everything but art and hating it. I never forgot how much I loved to do pottery. If I even walked down to the creek and slipped down and busted my tail in the clay, I would sit down and make a pot out of it before I went home.”

“Every time I watched someone else, I wanted to borrow their wheel and show off with them,” he said. “So I just couldn’t forget it. It was a dream that wouldn’t die. So one day, I buckled down and took some inheritance money and bought a wheel. And then I took an income tax return and bought a kiln.”

That was five years ago. Today, he spends his free time making pottery and selling it at festivals and craft shows.

“I found it all came back like riding a bicycle, and the skills redeveloped very quickly,” he said. “I have a very erratic schedule. I work partly during the day and partly at night. I get up at 5 a.m. sometimes and work until breakfast in the clay. I’ll stay up late at night after work and work in the clay. Any old time of day or night is fine.”