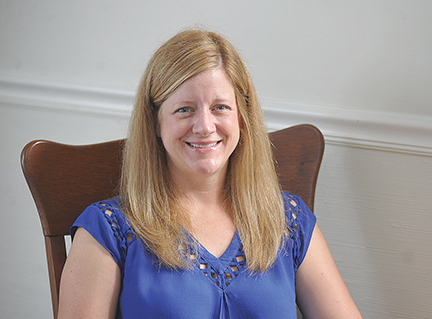 The self-proclaimed “mother of Leap Frog” was named Citizen of the Year for her decade-long efforts to enhance the reading skills of local elementary students.

Teresa Adams received the Citizen of the Year award from Oxford School District Superintendent Brian Harvey who presented the award at the board meeting on June 27.

“Teresa’s passion for her children and her program and their success is the primary reason for her selection as the Oxford School District’ Citizen of the Year,” Harvey said. “Teresa is committed to securing quality volunteers and materials for the Leap Frog program. Her persistence in working to find space and provide for logistics is one of her greatest assets.”

Leap Frog is a non-profit after-school tutoring and mentoring program that serves 140 at-risk first-, second- and third-graders from the Oxford and Lafayette County School Districts. Adams is the program’s sole paid employee and manages more than 200 student-volunteers from the University of Mississippi.

A 2005 Ole Miss graduate who majored in special education, Adams has lead the program through multiple fundraisers, expansion of students served and an imminent office move from St. Peter’s Episcopal Church to the OSD office.

“I’m the mother of Leap Frog,” she said. “If Leap Frog was a house, I would be the head of the household. Anything that goes in and out, I know about.”

Of the many hours Adams has given to our community over the last 10 years, she has also gained much by

by serving as executive director.

“It’s been a really great and fulfilling job,” she said. “I’ve met so many people and learned so much about how to run a program and financial aspects that I never thought I would know, like grant writing and fundraising.

“Leap Frog always takes me somewhere new each year, (somewhere) that 10 years ago I never knew I would go.”

Under Adam’s leadership, Leap Frog has grown fundraising efforts from a used book sale at The Double Decker Arts Festival to hosting more than 200 guests at the Firecracker Bash each July.

This year, the event was held on Friday and included a performance by Leap Frog students; silent auction items like a signed Eli Manning jersey; and the debut of Yalobusha Brewing Company’s new beer, Coffee Break Happy Hour. A proceed of sales from the new brew will be donated to Leap Frog.

“It’s like planning a wedding by yourself with volunteer helpers,” she said of coordinating the event.

Funds from the event will go toward moving the program to a new office and the use of a new reading intervention program called Phonics Boost.

Adams learned about the importance of giving back to the community through her parents.

“I grew up in a big family,” she said. “A big part of growing up was community service and helping others in need. My parents really made sure we never put ourselves above other people.”

Adams said she is honored to be recognized for Leap Frog’s service, and thanked her family for supporting her endeavors.

“I really have to give nods to my husband and children who are big supporters in everything that I do,” Adams said. “Everyone likes to say ‘Behind every man is a great woman,’ and it certainly rings true for the opposite.”