Vanderlip got the acting bug at an early age 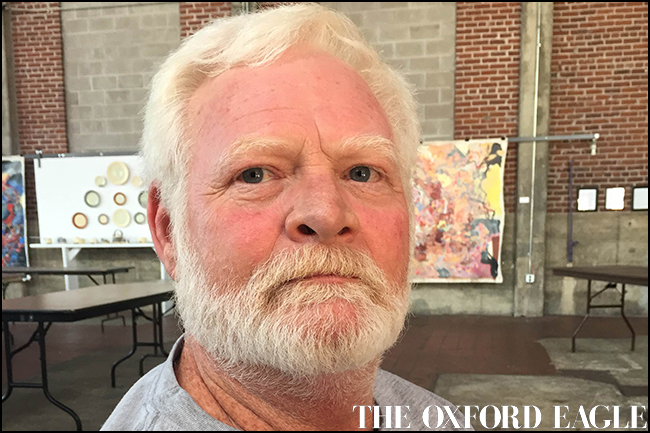 Kentucky native Mike Vanderlip, 59, grew up in the foothills of Appalachia, but has lived in Oxford the past 41 years.

“As a kid, you don’t really recognize what’s going on around you,” he said, “but when I go back down, I see. I was surrounded by poverty and had no idea how fortunate my family and I were, based on what was going on around us.”

Vanderlip, who was found inside the Powerhouse in Oxford Sunday, is working behind the scenes of Theatre Oxford’s upcoming production of Crimes of the Heart, a play by Beth Henley.

He became interested in theater at age 12 when he was cast in a community play called The Prince Who Couldn’t and the Dragon Who Wouldn’t.

“I kind of got the bug,” he said. “They had put some flyers up around the school. They were doing a production that had a large group of children, and they needed children to audition. I just thought it would really be fun. I’d be a big star.”

Vanderlip was cast as the prince.

“I didn’t know it was the lead role at the time,” he said. “It was just something that was making its rounds in children’s theatre at the time.”

“So I couldn’t, and he wouldn’t, and we became friends,” Vanderlip said. “The evil witch had cast a spell over the princess, and the king had decided whoever could get the princess to stop crying and make her laugh again and enjoy life again would be her husband and would become the next king.

“So they had taken what was supposed to be an apple. But it’s divulged to the audience, not to my character, that the apple was replaced by an onion.

“So I take this huge bite out of something that is supposed to be an apple, but it’s an onion, and I make this awful face, and the princess starts laughing, and I’m the hero.

“So it doesn’t matter that I’m a coward and won’t face the dragon. But it’s OK because he’s a friendly dragon.”

Vanderlip said the next production was a musical.

“When I went in to audition, I was the only person they didn’t allow to finish their prepared song,” he said. “I was just so devastated. I had so much fun with the first production.”

But he learned a valuable lesson that he has tried to share with others.

“The guy who was doing the set and scenery, who was a full-time employee of the community theatre, kind of took me under his wing and said, ‘That’s OK. You will still be important to this production.’

“I think all of us just deep down inside want to be a part of something bigger than ourselves. That lesson has served me well through the years, especially working with young people.

“You don’t have to be the person out front leading with the big part. Do your part as well as you possibly can, putting everything in that you’ve got, and it makes the whole that much better. It was great to learn that lesson as a 12-year-old. A lot people are 70, and they still don’t know it.”

Vanderlip said he moved to Mississippi from Kentucky when his father transferred to Grenada to work for a building products company that had bought a mirror manufacturing facility.

“When we moved down here, we were driving on the interstate, and I saw a sign for the University of Mississippi,” he said. “I looked over at my little brother, and I said, ‘That’s where I’m going to go to school.’”

He later moved to Oxford and became the night manager at Burger Chef, attending school during the day and working at night.

He studied accounting and ran the Small Business Development Center at the University of Mississippi for 18 years while working as an adjunct teacher at Northwest Community College and UM, where he taught accounting and hospitality management.

Retired, he’s now the technical director for Crimes of the Heart.

“On this show, I’m just going to be making the set, putting it together, those sorts of things,” he said. “On the next couple of shows, I may actually be the technical director, designing the sets and building them. This is my first season in Theatre Oxford.”

He describes Crimes of the Heart, a play that takes place in the early 1970s in Hazlehurst, Mississippi, as a “classic Southern drama.”

“It’s billed as a drama, but really, I’ve always thought of it very much in the classic Southern standard of a dark comedy,” he said. “I’m not sure if the folks who are not from this region would completely understand all of the humor in it.

“There will be parts where one minute you are laughing so hard your side hurts, and quite literally, 45 seconds later, you’ll fight back tears. This show is a roller coaster, but to me, that’s everything you want in theater.”