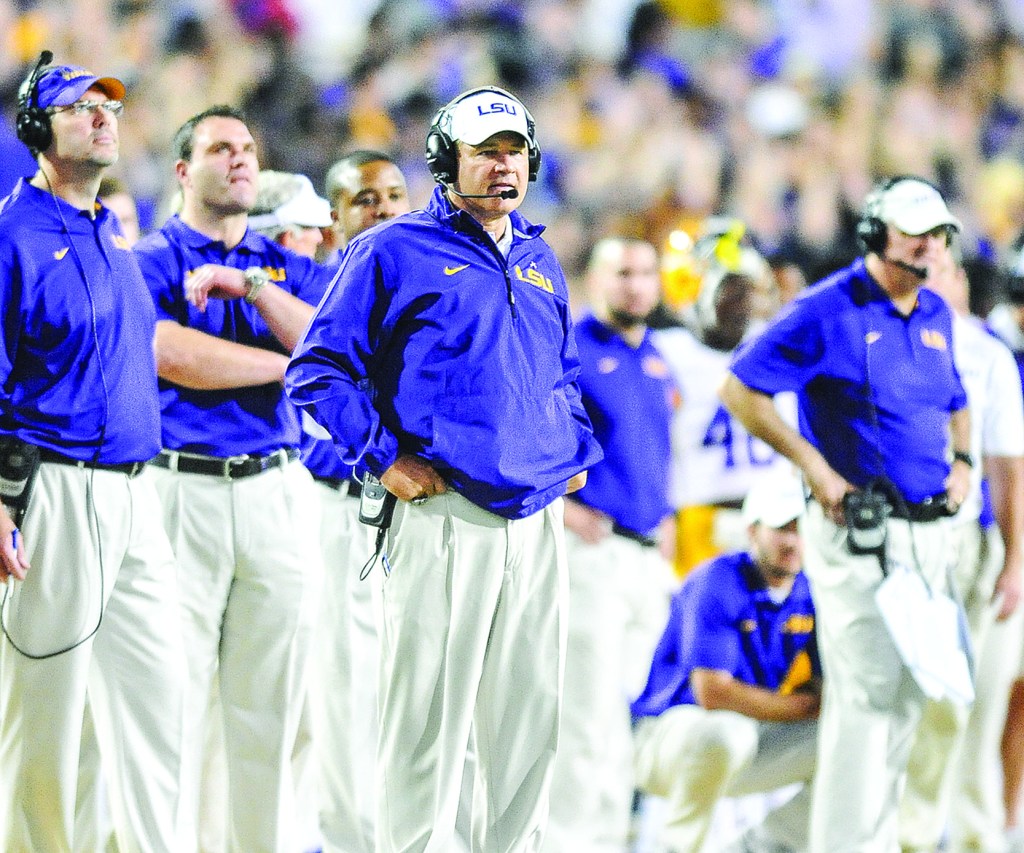 LSU is projected to give Alabama a fight for the Southeastern Conference’s Western Division title this season. To do so, head coach Les Miles, pictured, will need better play from his quarterback, Brandon Harris. (Bruce Newman)

HOOVER, Ala. — LSU’s Leonard Fournette was putting up massive rushing numbers last season until opponents started changing their defenses to stuff the run.

That put the onus on quarterback Brandon Harris to make them pay.

He couldn’t do it.

Fournette believes that’s about to change and Harris can become one of the league’s best quarterbacks. If so, LSU could quickly become the team to beat in the Southeastern Conference.

“I think he’s doing a tremendous job and I’m ready to see the new Brandon Harris on in September,” Fournette said on Thursday at SEC media days. “He has a new swag to himself. He’s talking like a quarterback should talk. He’s taking over at practice.”

Expectations are very high in Baton Rouge after a 9-3 season that included a 5-3 mark in the SEC. The Tigers won their first seven games last season before a three-game losing streak to Alabama, Arkansas and Mississippi that derailed the season and nearly cost coach Les Miles his job.

But Miles is back for this 12th season and LSU returns 17 starters, including nine on offense and eight on defense.

Fournette — who ran for an LSU single-season record 1,953 yards and 22 touchdowns last season — is considered one of the Heisman favorites and the defense includes seasoned veterans like safety Jamal Adams and linebacker Kendell Beckwith.

The only real question is at quarterback.

The 6-foot-3, 206-pound Harris had some good moments last season, throwing for 2,165 yards, 13 touchdowns and six interceptions while completing about 54 percent of his passes.
“Certainly our play there will be significant,” Miles said.

If Harris can keep opposing defenses honest through the passing game, it should leave a little more room for Fournette to run. The 6-foot-1, 230-pound junior was a Heisman candidate last season until his performance tailed off during the season’s most important games in November.

He said falling out of the Heisman race wasn’t disappointing. Instead, it was losing three crucial games that bugged him.

“I think we forgot our ‘why,’” Fournette said. “Why we work so hard just to get here. We were on top of the world, 7-0 and we’re in the SEC, the hardest and best conference to play in. We just had to get that back.”

Miles also spent a few minutes Thursday discussing the recent shooting of Alton Sterling by a white police officer in Baton Rouge. He hopes the football program can be part of helping society change.

“You reach for others,” Miles said. “You need to be respectful of their life and their opinion and who they are. You need compassion for people.”