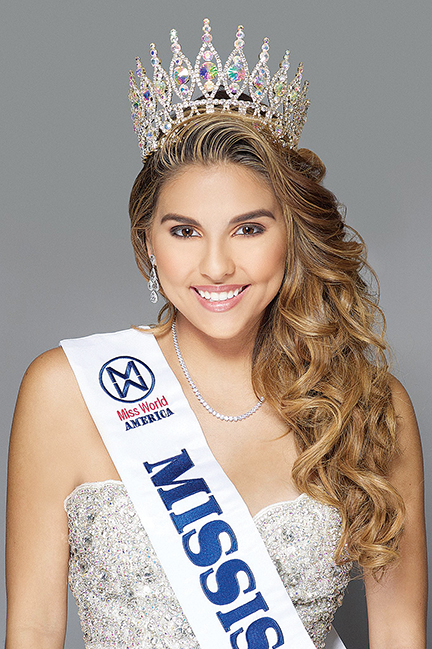 Oxford resident Andrea Hightower, 18, is exceptionally beautiful. That has led her to work professionally as a model, win the Miss Mississippi Teen USA pageant, and win fourth runner-up in the Miss World America Competition.

But she’s also common in some ways. Hightower is the child of a parent diagnosed with a mental illness. Since one in five adults, or 43.8 million people in the U.S. experience mental illness in a given year, it’s an something she shares with many.

That’s why she decided to speak out on the issue and become an ambassador for the National Alliance on Mental Illness.

“I have been through a lot of struggles with mental illness with my father,” said Hightower, who attends the NAMI national conference and has spoken with legislative leaders on the subject. “It’s something a lot of people don’t realize they are affected by.

“I share a lot of my own struggles just because there are a lot of people who deal with it. I find it helps them open up if I tell my struggles first.”

Hightower, who has lived in Oxford the last eight years and plans to attend the University of Mississippi in the fall majoring in integrated marketing and communications with a minor in Spanish, said mental illness awareness was also her platform while competing in the Miss World America pageant.

The pageant focuses on sports and fitness, modeling, evening gown and interviewing.

“We go in there with an open mind and open heart and answer questions,” she said. “There’s two parts to interview. There are seven judges in one part. You hop from judge to judge. You have two minutes with each judge. After that, you go into a panel. They go straight into rapid fire questions.”

Hightower said she learned about the Miss World America pageant through another contestant friend. This was the first pageant she has competed in as an adult.

The annual Miss World America pageant was held at the Gaylord Hotel and Conference Center at the National Harbor in Washington, D.C. July 8. Previous title holders have been Halle Berry (1986) and Lynda Carter (1972).

The winner of the 2016 pageant, Audra Mari of North Dakota, will represent America at the Miss World Pageant in December at the same location. Hightower was also previously a state title holder for Miss Mississippi Teen USA.

Hightower said she asked her father for permission to share his mental health journey. He agreed to allow her speak about his health, but she said he wasn’t sure about having his daughter compete in a pageant.

“He said people consider pageant girls people without intellect, people who just have physical beauty,” she said. “It took him a while to get on board. Once he saw there was scholarship money in it, he was all for it.”

Minnie Hightower said her daughter explains to others that mental health isn’t any different than other health issues people face, and people should not be ashamed to speak with psychologists or counselors.

“I’m proud she’s advocating for people who don’t get the help they need,” she said.

“Because her platform is so personal, we talked about it,” she said. “I’m proud that she was able to open up and help other teenagers. I know she’s at the end of her teenage years, but to be able to reach out to other kids and say, ‘That’s OK.’”