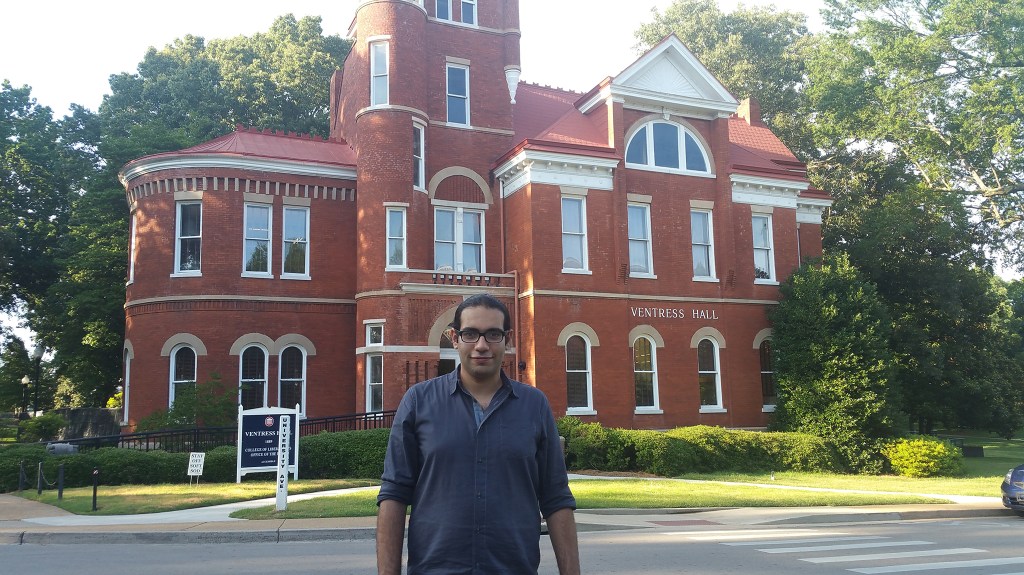 Ahmed Seif will be leaving Ole Miss to study at Oxford University this fall.

After three years at the University of Mississippi, Ahmed Seif was ecstatic to learn this summer that he has been accepted into two medieval studies programs at Oxford University in England.

“I am thrilled, as well as grateful, to the University of Mississippi for my journey into making a change,” said Seif, an Egyptian who earned his Master of Arts in English in May. “This journey started here in August of 2013 at Bondurant W112, the classroom where I took my very first graduate seminar in medieval literature.”

Depending on his choice, Seif will be enrolled in either Christ Church College through the English faculty or Oriel College through the history faculty. During the one-year program, Seif’s research would be interdisciplinary, examining the connection between medieval literature and medieval diplomacy. Laura Ashe, associate professor and tutorial fellow in medieval English at Worcester College, would be his mentor.

“I will also investigate medieval roots of diplomatic conflict, peace negotiation and intercultural encounters between the East and the West,” he said. “Despite my research being medieval, it is relevant to the current state of affairs. Explaining how this is so in detail would take pages, but, in a nutshell, my research will trace the international crisis back to its medieval roots.”

While dual admission is an extraordinary opportunity, studying at Oxford University has a high price tag attached to it. Unfortunately, Seif’s supply doesn’t quite meet the demand.

Oxford University does not accept requests for deferral on grounds of financial circumstances. Therefore, Seif has started a crowdfunding campaign,https://www.gofundme.com/SendSeiftoOxford, with the hope that he can raise the sum of money estimated (as well as required) by Oxford University to cover his tuition and living costs.

“I believe it will achieve its target when the word gets out to many more people than I can reach by myself via social media,” Seif said. “Oxford University notified me of my acceptance after many scholarships had already closed. Although one Egyptian scholarship was still open, my application was turned down, as they tend to fund more students in business studies and the sciences than in liberal arts fields.”

Despite Seif’s best attempts, he is ineligible for loans here because he is neither a citizen nor a resident of the United States.

“I also applied for an Egyptian loan on the security of my mother’s job,” he said. “My mother is a social worker. Due to her small salary, and also due to the exchange rate, the loan she can take would make for an insignificant amount of money when expressed in sterling.”

A UM faculty member said because Seif is a foreign student of severely limited financial means, he needs more help — and is most deserving of it.

“Ahmed has already shown himself to be a promising young scholar, and working with the English faculty at Christ Church will further deepen his knowledge and develop his skills,” said Ivo Kamps, chair and professor of English. “I expect that studying at Oxford University will serve as a springboard for Ahmed to become the scholar and professor of medieval literature he hopes to be.”

Seif came to the U.S. as a Fulbright scholar. His goal is to return to the U.S. and pursue a Ph.D. in medieval literature.

“I want to teach medieval literature at the college level as well as be a scholar of medieval manuscript,” Seif said. “I want to use my Western education, together with my Eastern, Egyptian background, towards becoming someone akin to an academic ambassador, one who can help bridge the divide between East and West.”

Well-versed in both English and Arabic, Seif said he wants to reach out to students, scholars and readers on both sides of that cultural divide.

“I would like to be the secular scholar who translates a fraught history of conflict and collaboration into a story of mutualism and vision for a better future,” he said. “I deeply believe in my academic vision and have full confidence in my ability to succeed in what I aim to do.”