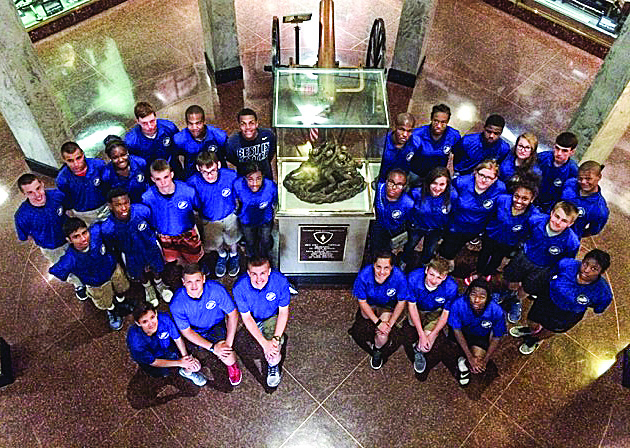 “It’s the opportunity to go with others and learn a bit more about how the military works,” Cadet Staff Sergeant Anna Takerer said. “It helps you build confidence, it’s a lot of team work and team building.”

The camp specializes in teaching leadership skills, exposing cadets to the military lifestyle and preparing for the future. Cadets interact with one another in military barracks, eat in a recruit mess hall, practice platoon drill movements, undergo physical training and complete obstacle and confidence courses. Cadets were also exposed to Marine Corps history while visiting the Parris Island Museum.

First Sergeant David Leach, who served as an instructor at the camp, accompanied cadets.

“The cadets walked away with many new skills in which to apply during the upcoming school year,” Leach said. “I believe they obtained a better understanding of unity, camaraderie and Esprit de Corps, and they achieved a greater appreciation for the military and what it takes to earn the title of United States Marine.”

Throughout the camp’s programming, cadets gain self-confidence, self-control, communication skills and a sense of patriotism.

Junior ROTC member Ra’Anthony Perry attended the camp and served as a Squad Leader. Perry was responsible for making sure his peers followed rules and learned how to motivate others.

“I learned more about my role as a Staff Non-Commissioned Officer, how to step up and take charge,” he said.

Perry also developed time management skills by being on time for meals and other camp events.

Takerer, who also served on the staff at camp, left feeling inspired by her peers’ growth, teamwork and camaraderie.

“I saw a lot of the cadets really break out of their shell,” she said. “I noticed they would take on challenges, and I was really impressed with their ability to get over their fear of heights. My favorite part was seeing all of us grow as a unit.”