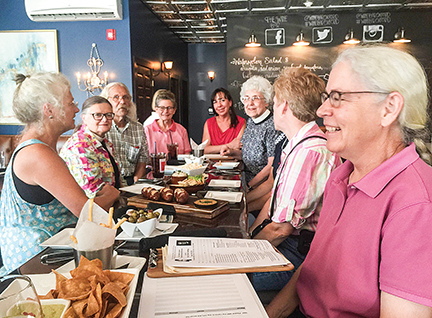 lareeca rucker Gail Stratton, right, president of PFLAG, socializes with others from Saint Peter’s gay and lesbian ministry who attended a gathering Thursday.

More than 10 years ago, a North Mississippi organization that supports gay and lesbian people and their parents and friends teamed with Saint Peter’s Episcopal Church in Oxford to create its Gay and Lesbian Ministry.

Today, Parents, Families, and Friends of Lesbians and Gays, or PFLAG, and Saint Peter’s at 112 South 9th Street in Oxford are working cooperatively to support gay and lesbian people and those who love them with special attention to spirituality and church life.

Thursday, the two groups met for a social gathering at the Oxford restaurant The Wine Bar.

Rene Pulliam, 65, is the interim chair of the Department of Theatre Arts at the University of Mississippi. She is also a member of Saint Peter’s and one of the ministry leaders.

“Because I’ve been in theatre almost most of my life, I’m very aware of my gay and lesbian friends’ challenges,” she said. “I am not gay, but most of my friends are. Growing up in the Episcopal Church, I was very excited that there was a ministry like that here.”

“We are realizing that one of the biggest things you hear from young people who have just come out is that their church no longer welcomes them,” she said. “They grew up in the church, so that is very devastating.”

Gail Stratton, 61, who is originally from Los Alamos, New Mexico, is the convener or president of PFLAG of Oxford and North Mississippi. Founded in 2004, the group now meets on the second Thursday of each month at 7 p.m. in Room 110 of the Lyceum on the UM campus.

PFLAG is a national non-profit organization with more than 200,000 members and supporters and approximately 500 affiliates throughout the United States. It was founded in 1973 by mothers and fathers of gays and lesbians.

The group provides opportunities for dialogue about sexual and gender identity and works to increase understanding about these issues.

Stratton said the North Mississippi chapter of PFLAG has members from Batesville, Booneville, Tupelo and other Mississippi towns. Tupelo now has its own chapter.

“We intentionally wanted it to be beyond Oxford, because Oxford is its own special place,” Stratton said. “And I think there are people outside of Oxford who feel pretty isolated.”

Stratton said she and her wife are members of the Unitarian Universalist Congregation of Oxford.

“Around 2004, members of St. Peter’s and members of the Unitarian Universalist Congregation of Oxford started asking what can we do in this town to be supportive of lesbian, gay and bisexual people,” Stratton said. “PFLAG was one idea they had.

“So that’s what we did. I think it’s made a huge difference in Saint Peter’s because it’s a way of saying, ‘We welcome everybody.’”

Stratton said she’d like to see other churches embrace the LGBT community.

“Everybody deserves to be welcomed in their own faith tradition,” she said.

There are about 15 people who are members of the Saint Peter’s ministry that meets at the church the third Thursday of every month.

St. Peter’s has other inclusive ministries, such as the Interfaith Compassion Ministry, a Parchman Prison Ministry and a Racial Harmony Committee.

For more information about the Saint Peter’s ministry, contact Pulliam at 662-234-8705 or rpulliam@olemiss.edu.

For more information about PFLAG of Oxford and North Mississippi, contact pflagoxfordms@gmail.com or look for their Facebook page.