McGee was getting into his vehicle, but stopped for a chat. He said the Sunday sermon was about growth and maturity.

“You can be baptized today, but it doesn’t mean you’re going to catch the Holy Spirit right away,” he said. “You have to grow into it. You can’t do the same thing you did years ago that you are still doing now.” 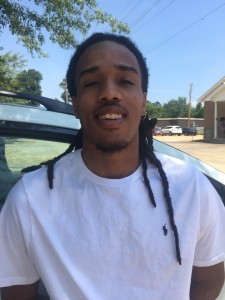 McGee grew up playing sports. He fondly recalls summer league baseball and playing football and basketball as a child.

He attended Water Valley High School, where he played basketball, football and baseball.

After graduating, McGee said he’s had a few setbacks, but he continues to move forward in life. He’s now a student at Northwest Community College studying business.

He said he’d like to work in the hotel industry.

In the meantime, he is active in his church and leads youth groups.